Founded in 2011 by historians trained at Harvard University, U.S. History Scene is a multimedia history education website composed of historians and educators at over fifty universities dedicated to providing students and teachers with easy access to premier digital resources, live digital curriculum, and cutting-edge history scholarship. Our goal is to use innovative open source technology to democratize learning, narrow the achievement gap by helping history students realize their intellectual potential, and master United States history in a way that is entertaining, relevant, and intuitive. We bring you the best of the archives (without the dust!).

U.S. History Scene is used by 20,000 public schools in the United States. The over 10,000 edited internet pages of historical content and research on U.S. History Scene has been cited by the New York Times, the Washington Post, The Atlantic, Salon.com, GQ, Smithsonian Magazine, The St. Louis Post-Dispatch, Harvard University Press, California University Press, The Journal of African American History, Slate, The Daily Beast, Huffington Post, Clarity Films, PBS, CSPAN, MTV, Vice, Back Story Radio, The United States Census, The Gilder Lehrman Center for the Study of Slavery, Resistance, and Abolition at Yale; and an amicus brief to the Supreme Court of the United States.

U.S. History Scene provides educators with free digital resources hand selected by historians. Using U.S. History Scene, teachers can incorporate into their curriculum cutting-edge research from top-tier universities (such as, UC Berkeley, UCLA, Yale, Stanford, Columbia, and the University of Chicago) that is relevant and pluralistic in scope. The content on U.S. History Scene helps teachers empower their students with a solid understanding of our shared past, without having to break the bank. 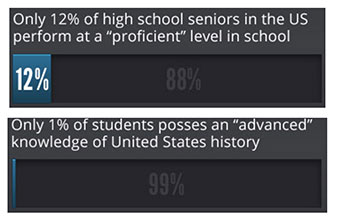 The National Assessment of Educational Progress (NAEP) History Exam released in June 2011 shows that only 12% of high school seniors (in both public and private schools) in the United States are able to perform at a “proficient” level. The exam further shows that only 1% of the students possess an “advanced” knowledge of United States history. President Barack Obama stated on September 23, 2011 that due to budget cuts, “subjects like history and science have been squeezed out” of the American curriculum at a time when their importance couldn’t be more urgent. This is a solvable problem.

Students are increasingly technologically literate and accustomed to thinking analytically with online film and sound. Using student’s interests and skill set to improve their reading comprehension, writing, and historical analysis will make classroom learning fun and intuitive. Instead of limiting lecture time to classrooms, students can now use their cell phone to access hundreds of history classes to watch on the subway or listen to while walking to school.

U.S. History Scene aims to assist economically challenged students and people with intellectual disabilities with equal access to a premier education. Videos, text, and image stimulate different memory techniques for students who are Visual or Auditory learners. Being able to learn directly from diverse historical subjects in their own words makes history relatable for students who question the applicability of history to the daily struggles they face in their own lives. If you have suggestions on how we can provide resources for your students, please contact us. 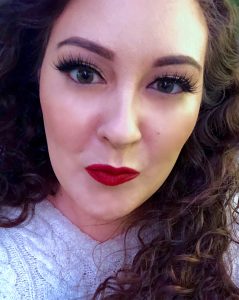 Dr. Rhae Lynn Barnes is an Assistant Professor at Princeton University, a historian, public speaker, writer, onscreen commenter, consultant, and researcher specializing in the globalization of American culture and the multicultural American West. She’s taught History; Women, Gender & Sexuality; and Digital Humanities at Harvard University, UC Berkeley, the University of Southern California, and Princeton University. Splitting her childhood between the Magic Kingdom (as Walt Disney dubbed Disneyland) and the Tragic Kingdom (No Doubt’s perception of late-Reagan Era Anaheim, California) fueled Barnes’s intellectual obsession with history and the cultural memory of race, gender, and sexuality in the American West.

Rhae Lynn Barnes grew up in a white working-class background and union family. She received her B.A. in History at U.C. Berkeley where Leon Litwack often reminded her the point of history is to “tell the truth, fight the power, and get paid to listen to Rock ‘n’ Roll.” She left her beloved California mountains and Mexican food for Cambridge, Massachusetts, to live and learn with some of the brightest minds in the coldest place. Since receiving her Ph.D. from Harvard University, she has been a fellow at USC’s Society of Fellows, an NEH Visiting Scholar at Bard Graduate Center to study nineteenth-century American material culture, and was elected President to the Council of the Andrew W. Mellon Society of Fellows in Critical Bibliography. Her first book, Darkology: When the American Dream Wore Blackface, which maps the political, economic, and cultural geography of amateur blackface by laying bare its unstudied bibliographic history, received funding from the Library of Congress, the National Endowment for the Humanities, CLIR, the Western History Association, the Society for American Music, the Bibliographical Society of America, and the Andrew W. Mellon Foundation. She is also serving as an Executive Advisor on Henry Louis Gates Jr.’s four-part documentary series “Reconstruction and the Rise of Jim Crow” (airing 2019).

Jenni Ostwinkle grew up on a dairy farm outside of Worthington, Iowa, population 401 (if you don’t count the cows). She received her B.A. in History from the University of Northern Iowa, but they say you have to leave home to really know it, so she left the actual “Field of Dreams” to study agricultural history at Harvard. She has worked in public history as a Project Assistant for the The Center for the History of Rural Iowa Education and Culture (formerly The Iowa Rural Schools Project) and as the Local Foods Coordinator for Dubuque Eats Well, a network of producers, consumers, and institutions collaborating to grow an equitable and sustainable food system. With a background in history, agriculture, and education, Jenni is committed to telling stories in a way that is relevant, interesting, honest, and alive. She is (usually) patient when explaining that history is about much more than memorizing names and dates.

Outside of her work at U.S. History Scene, Jenni is the Communications and Education Director for a local business, where she facilitates projects, develops training, and maintains the communications systems. She is committed to electing more women to government and is hard at work on the 2018 elections. And, because you can’t ever fully take the girl off of the farm, she still occasionally milks cows.

U.S. History Scene links to videos already accessible online. If you believe that you are the owner of copyrighted material and would like it removed from our site, please contact us at editors@ushistoryscene.com.