Classic Recordings of Stephen Foster’s famous songwriting for blackface minstrelsy mentioned in Inside the Minstrel Mask:

Al Jolson’s The Jazz Singer was the first film released in America synchronized to sound. It chronicles the life of a Jewish American blackface actor. The “Mammy” song was re-released on vinyl, sheet music, player piano scrolls, and later VHS. The famed “Mammy” pose with Al Jolson singing while on one knee is an iconic gesture used in many amateur minstrel productions school children were required to perform between 1930 and 1970 in the United States.

The famous “Steam Boat Willie” song or “Turkey in the Straw” which plays on nearly every ice cream truck in America is actually Zip Coon’s minstrel song, popularized in the nineteenth century for blackface shows. Steamboat Willie created by Walt Disney is often recognized as the first animated cartoon synchronized to sound in 1928. When you watch this clip, pay attention to the subtle references to blackface culture and the use of violence.

This clip, below, is a film representation of a “Stump Speech” typically found in the second part of blackface shows called the Olio. You can read textual versions of these from pages 135-141 in Inside the Minstrel Mask.

In this clip from a technicolor biopic about Stephen Foster called Swanee River (1939) starring Al Jolson, you can watch an example of a “minstrel circle” and “endmen” perform the Stephen Foster classic “Camptown Races.” This clip also includes a soft shoe dance (the minstrel precursor to tap dancing).

Here you can watch rival cartoon examples of amateur blackface shows staged by Paramount and Disney characters using mid-nineteenth century blackface songs as the soundtrack. This is a blackface reinterpretation of Uncle Tom’s Cabin. If you are interested in teaching the use of blackface in animation, the best book on this topic is Birth of an Industry.

Finally, it’s important to think about the recirculation of blackface in major motion pictures like Babes in Arms and Babes on Broadway starring Judy Garland and Mickey Rooney. Both films were directed by Busby Berkeley and show how closely blackface was associated with American patriotism.

Contemporary artists like Childish Gambino have intentionally used references to antebellum minstrel shows to comment on American culture in the twenty-first century. 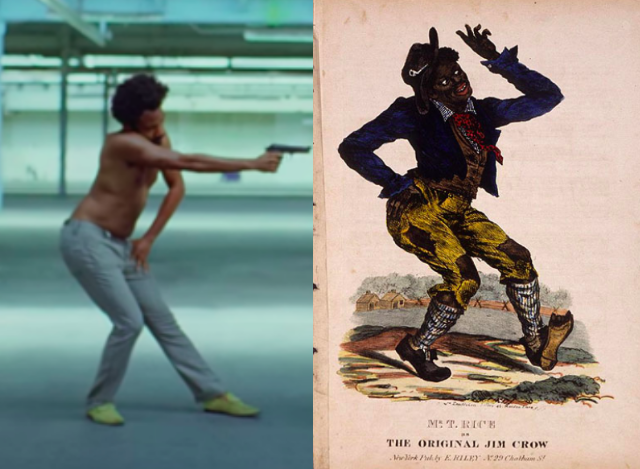 Look at a list of Stephen Foster songs. Locate two digitized versions of that Stephen Foster song on sheet music covers. You must find one published between 1830-1880 and one from anytime between 1881 to 2019. As Stephen Foster is in the public domain and considered a part of the classic Americana songbook, it is very easy to do. You can find digitized versions of his sheet music on the library websites for the Library of Congress, the Digital Public Library of America, Brown University, Duke University, UCLA, Harvard University, and Princeton has hundreds on campus. Once you have selected two, compare and contrast the cover art and imagery on the two sheet music covers in a paragraph. Next, compare and contrast the lyrics–are they in dialect? Are they sanitized? What stories do the lyrics tell? What change over time do you notice? What is staying the same?