As Japanese people came to America, they faced racism and discriminatory laws that made it difficult to own land, as well as break into industries beyond agriculture. At the beginning of World War II, about 1,300 Japanese-Americans lived in Berkeley and Japanese immigrants and their children owned roughly 70 businesses. With the issuance of Executive Order 9066, Japanese-owned businesses faced the unique challenge of either liquidating all of their assets or ensuring the care of their businesses to others. Many Japanese business owners traumatically lost their businesses and property without the chance to be compensated, despite expressing loyalty to the United States or holding U.S. citizenship. Most were unable to regain their businesses and had to start from scratch or switch to new industries, demonstrating both their resilience but also the long-term socio-economic damage of internment.

At the time of the bombing of Pearl Harbor and the subsequent Executive Order 9066, many Japanese immigrants around Berkeley worked in gardening. Cookie Takeshita, who grew up in Alameda, recalled that when her father immigrated in the 1920s to California, an earlier immigrant told him, “the Japanese people here found that it’s not like Japan, you can’t just get a job, and most of us are doing gardening.” Takeshita’s father was not an experienced gardener, but he learned from other Japanese residents and was able to start his own gardening business. The main barrier to other industries for Japanese people, according to him, was not knowing the English language; he told Takeshita that “before he knew it, everybody who was Japanese was either a gardener or working in…a Japanese restaurant because they couldn’t speak English.” Berkeley resident Yoshiko Uchida however, argued that even educated Nisei had a hard time finding employment and resorted to gardening, the “one area in which employers seemed happy to hire Japanese.”

Between the bombing of Pearl Harbor and the forced evacuation, business owners continued to run their businesses while dealing with curfews and restrictions on their movement. Takeshita’s father continued to garden until the evacuation, and since he only worked in Alameda, he was not restricted by the 5-mile limit that was put into place on Japanese people’s movement. Kazuko Iwahashi’s father owned a nursery in Berkeley called University Avenue Nursery, in addition to a gardening business. While he was forced to sell his inventory and store, she remembers him putting an ad in the Berkeley Gazette “thanking the community for their kindness and allowing him to be their friend and gardener.” Iwahashi’s father never opened a storefront again after returning to Berkeley, although he operated a nursery business out of his home. While the public sentiment may have turned against the Japanese, that animosity did not necessarily extend to the relationship between Japanese business owners and their customers.

Even prominent Japanese members of the Berkeley community and American citizens suffered damage and loss of their businesses, causing emotional trauma. Chiura Obata, a UC Berkeley art professor at the time, owned an art studio and shop on Telegraph Avenue with his wife. After Pearl Harbor, a gun was fired into the studio. Eventually, Obata and his family were interned in Topaz, Utah. Yae Wada, a Nisei, left behind her beauty salon in the Oakland Chinatown when she was evacuated. As a United States citizen, Wada did not expect to be gone long, and thus did not arrange to sell her equipment or store. She told her father, “Don’t worry…we’re American citizens…we’re not going to be sent anyplace.” Wada was not able to return to Berkeley for five years after being evacuated. 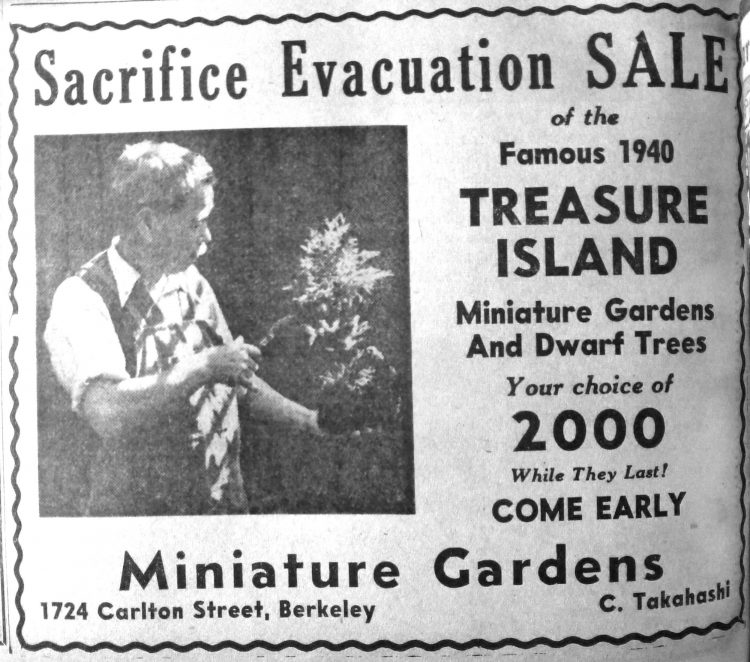 Besides the emotional and psychological damage of evacuation and internment, Japanese business owners in Berkeley also faced the practical problem of what to do with their businesses. Berkeley citizens were given ten days’ notice of their evacuation, leaving many scrambling to pack and make arrangements for property, pets, and businesses. Many simply left or sold their businesses after liquidating their stock. The rapid timeline of evacuation forced them to sell their goods at steep discounts. Fred K. Fujii, who owned Fujii Nursery Co. on Oregon Avenue in Berkeley, put an ad in the Berkeley Gazette stating, “Don’t Buy until you see Fuji’s Special Bargain Prices.” Another ad is pictured below, advertising a “Sacrifice Evacuation Sale” with two thousand available plants at a nursery on Carlton Street in Berkeley. A few business owners were able to leave the care of their livelihoods in the hands of friends or neighbors. Wada recalls her father making arrangements to keep his laundry business open while he was gone. The business, called Ashby Laundry in Berkeley, was left in the care of a neighboring Chinese family. She states, “somehow, because of years of just being neighbors, being friendly, they settled that business on a handshake.” Wada’s father was able to regain control over the business from the Chinese family upon his return four years later. Wada comments that she considers her family “lucky” because “we had a place to come back to,” indicating that this easy re-assumption of the property was not the norm.

Once interned, some of the former Berkeley business owners were able to use their skills to gain employment. Fujii, pictured above, was photographed by Francis Stewart harvesting plants grown for experimental purposes after being evacuated to the Gila River Relocation Center. The caption states that he had “20 years experience in the nursery business,” referring to his years running Fujii Nursery Co. Bob Utsumi’s father, who had owned a photography studio in Oakland, was able to work as the official photographer in the Topaz Co-op, utilizing his photography skills while being confined. Helen Harano Christ’s father was an independent gardener in Berkeley before her family was interned and taught landscaping in Topaz to other internees. Perhaps most famously, Chiura Obata founded art schools at Tanforan Assembly Center and in Topaz, Utah, teaching his fellow internees how to sketch and paint. Christ’s father and Obata not only continued working in the camp but taught those around them, adapting and continuing to pursue their skills and interests while interned, despite the conditions.

After being freed from internment, some former residents of Berkeley chose to return, while others sought new lives elsewhere in the United States. Cookie Takeshita’s father was one former business owner who returned to Berkeley. Having lost all his gardening equipment, he nevertheless went around his neighborhood asking for gardening work. She states that prospective customers would ask him “Oh, where have you been?” but were satisfied with vague answers about being “out of California.” Her father was successful in gaining whole blocks of customers by knocking on their doors one by one.

Christ’s family did not return to Berkeley; after being released from the internment camp her family relocated to North Platte, Nebraska, where her father got a job working for a florist. Yae Wada, the U.S. citizen who had left her beauty salon in Oakland without making arrangements for it, found that upon her return, all her salon equipment had vanished and a strange family was living in the location. She never opened a new shop, stating, “it would have been too expensive to set up a shop all over again. I didn’t have that kind of money.” Obata also never reopened his studio and store on Telegraph Avenue, despite going back to his position as a professor at UC Berkeley.

Berkeley business owners who immigrated from Japan or were born to Japanese parents often invested great amounts of time and effort into their businesses and almost all of them lost their businesses upon forced evacuation. They were faced with the difficult process of liquidating their inventory and either selling their businesses or leaving them behind in the care of others. Many used their skills to find employment in camp and continued to work in similar industries post-release. Few regained ownership of a business post-internment due to the cost and effort required to establish one. The difficulties didn’t end when internment did; some scars are lasting.

Racialized Borders within the United States