This lesson considers Japanese internment in the United States during World War II from the perspective of Japanese-American artist Miné Okubo, who sketched life in the relocation centers in California and Utah.

After this lesson students will

Divide students into groups and have them analyze three cover images of Trek in the Bancroft Library collection by Berkeley alum and teacher Miné Okubo.

Have students visually analyze the images.

During your lesson follow up, have students consider the questions below alongside Okubo’s recollections of the aftermath of Executive Order 9066:

We were suddenly uprooted—lost everything and treated like a prisoner with soldier guard, dumped behind barbed wire fence. We were in shock. You’d be in shock. You’d be bewildered. You’d be humiliated. You can’t believe this is happening to you. To think this could happen in the United States. We were citizens.

–Miné Okubo, from Beyond Words: Images from America’s Concentration Camps

Regarding the drawings for Citizen 13660, Okubo said: “All my friends on the outside were sending me extra food and crazy gifts to cheer me up. Once I got a box with a whole bunch of worms even. So I decided I would do something for them. I started a series of drawings telling them the story of my camp life. At the time I wasn’t thinking of a book; I was thinking of an exhibition, but these drawings later became my book, Citizen 13660. So I just kept a record of everything, objective and humorous, without saying much so they could see it all. Humor is the only thing that mellows life, shows life as the circus it is.”

In the camps, first at Tanforan and then at Topaz in Utah, I had the opportunity to study the human race from the cradle to the grave, and to see what happens to people when reduced to one status and condition. Cameras and photographs were not permitted in the camps, so I recorded everything in sketches, drawings, and paintings.

–Miné Okubo, from Beyond Words: Images from America’s Concentration Camps

Ask them to consider the contexts for these images. Who were they created for? Who did the artist think would look at them? How might contemporary (1940s) viewers have looked at these images domestically in America? What would a global audience think of them? Why is it important to have Japanese residents of the relocation centers drawn by another resident? How is the view from inside the centers different from the view from outside of the centers? Is it important to look at these images today? Why? If you have also discussed W.E.B. DuBois’ idea of “double consciousness” regarding being Black in America, consider Okubo’s work in a similar sense; what did it mean to be Japanese-American in America in the aftermath of the Pearl Harbor attack? How/Do these images illustrate the violation of American citizens’ civil rights? 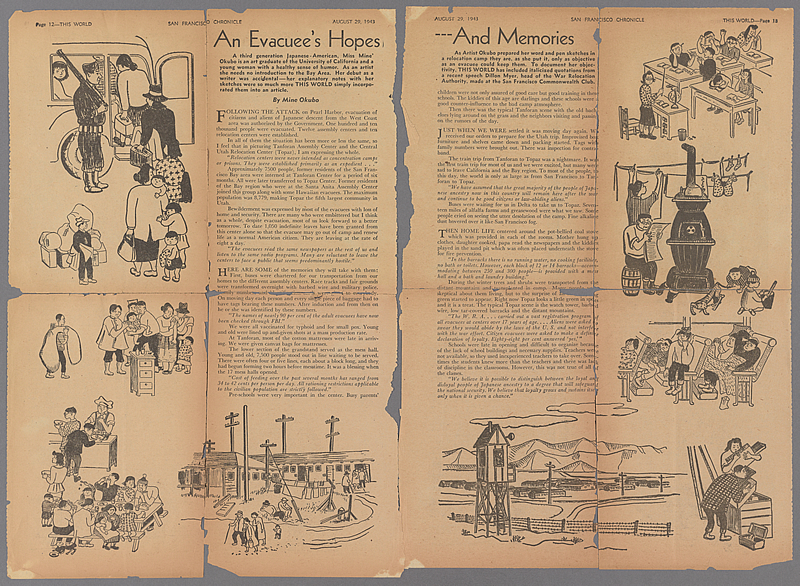 As a class, read the text to “An Evacuee’s Hopes—And Memories,” by Miné Okubo in the San Francisco Chronicle, August 29, 1943. Then ask the students to analyze the sketches accompanying the article in a similar manner to those from Trek. Ask them to describe the narrative that Okubo creates in text, and then in sketch. Are those narratives similar? Do text and sketches have different effects on the reader/viewer? How is the characterization of camp life different in text and sketch? How is a narrative of nine sketches different from single sketches like the first ones they analyzed?

Background of the publication Trek


Trek was a literary and arts magazine published by the Japanese-Americans interned at the Central Utah Relocation Camp in Topaz, Utah, between 1942 and 1943. Miné Okubo was the art editor, drawing many of the illustrations and covers of the

Miné Okubo was an American artist born in Riverside, California in 1912. She studied at Riverside Junior College and earned a BA And MA in art from the University of California, Berkeley. She won a Bertha Henicke Taussig Traveling fellowship from UC Berkeley to study art in Europe for 18 months in 1938 but had to return to the United States because of World War II. She made painted frescoes and mosaic murals for the federal Works Progress Administration (WPA) in the San Francisco Bay Area from 1939-1941 and was working on a mosaic at Fort Ord when Pearl Harbor was bombed. She and her brother were briefly incarcerated at Tanforan Relocation Camp (San Bruno, California), and was removed to Central Utah Relocation Camp in Topaz, Utah, where she lived from 1942-1944. Okubo taught art and made pen and ink drawings of her experiences living inside the camp. She published some of her drawings in magazines, and a drawing for Fortune magazine (and subsequent job offer in 1944) resulted in her release from the camp. She moved to New York City, where she worked for Fortune, the New York Times, and Life magazine. Her book of illustrations of camp life, entitled Citizen 13660, was published in 1946. She continued to make and teach art and educate about her experiences during the war, testifying in front of Congress in 1981. In 1991, she was awarded a Lifetime Achievement Award from the Women’s Caucus for Art of the College Art Association. Okubo died in 2001.

Miné  Okubo, Illustration of people during a meal, TREK

All images and documents courtesy of the Bancroft Library, University of California Berkeley unless otherwise linked.