Before examining American apprehension about the Quebec Act, it’s important to consider the historical environment that produced the Act. For the British, the 1763 Treaty of Paris signaled the end of the Seven Years’ War against the French and Spanish, but it also heightened tensions in the American colonies. The war proved very costly, forcing the British to collect more tax revenue from the Americas.

Moreover, the British needed to limit American westward expansion to prevent colonists from provoking another war with Native American tribes. American colonists viewed these measures as attempts by the British to expand their imperial authority—thus sowing the seeds for future conflict between Americans and Britons. More specifically, the Treaty of Paris set the stage for British rule in Canada. Article IV of the accord ceded control of the Canadian territory from France to Britain. It also condoned the religious differences between French Catholics and British Protestants. As Canada changed from French to British hands, the British ensured in the Treaty that Catholic subjects in Canada were allowed to worship freely and received equal rights as Protestants. For the largely Protestant American populace, this perceived promotion of Catholicism was viewed as a dangerous precedent.

Eleven years after acquiring Canada in the aftermath of the Seven Years’ War, Britain issued the Quebec Act to govern the territory more effectively.

With revolution in the American colonies a real possibility, members of Parliament feared that, if war were to break out, French Canadians would support the American rebels. From the British perspective, the Quebec Act was not an attack on the American colonies. Instead, it was a measure to secure the allegiance of Britain’s Canadian subjects.

1. To appease the Canadians, the Quebec Act increased political freedoms for Catholics by removing references to Protestantism from government oaths.

The Act removed the requirement that government officials in Canada swear an oath that made specific reference to Protestantism. This meant that French-Catholic Canadians could participate in colonial government without abandoning their faith. Furthermore, the Quebec Act offered special privileges for Catholics, such as permitting the collection of tithes and allowing previously banned Jesuit priests into the province. These exceptions frightened American colonists who feared not only an increase in Catholic power—American colonists were predominantly Protestant—but also that Britain would pursue similar policies by meddling in American religious policy.

2. The Quebec Act consolidated British control in Canada by increasing the size of the province. 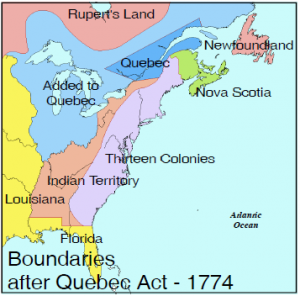 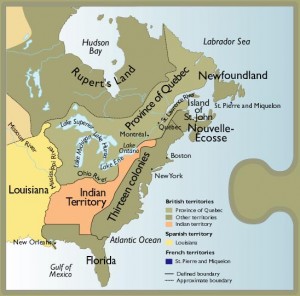 Article I of the Act outlines the expansion of the Canadian colony into western American territories. These additions nearly tripled the territory of the old French province and granted Canadian colonists much more land for settlement. However, an increase in Canadian territory amounted to a decrease in the land available to American colonists. Americans saw this distribution of western territories as an unfair restraint on American expansion, as well as evidence that Parliament may soon start regulating the borders of the American colonies.

3. The Quebec Act specified the structure of a new Canadian provincial civil government.

Between the years 1763 and 1774, Britain made few attempts to structure the civil government of its new colonial possession. With the Quebec Act, though, Parliament set forth a plan for a fairly autocratic government. Per the Act, the head of the Canadian government was to be appointed by the British Crown and no provisions were put in place for an elected legislative assembly to represent the Canadian people.  Reforms like these terrified the American colonists. At a time when Americans felt underrepresented in government, the existence of a Canadian province that offered no representation to its people was startling. If the British were willing to take these actions in Canada, what would become of the Americans’ beloved colonial assemblies?

In many respects, American opposition to the Quebec Act differed little from already contentious issues. The distribution of western land, religious affiliation, and structure of government were concerns that the American colonists had long fought over, both with the British and amongst themselves. What was it about the Quebec Act that motivated American colonists so strongly to accelerate their drive for independence? The answer lies in the apprehension and distrust colonists felt towards the British. The Quebec Act set a precedent for British absolute rule in North America—exactly what Americans feared most.

The colonists quickly recognized intensified British rule in Canada and deeply feared that it would spread to the American colonies.

In one sense, the greatest aspect of Empire, for the Americans, was that it left them alone. Despite being under the rule of British royal governors, American colonists enjoyed effective independence throughout much of the eighteenth century.

The governors issued orders, but the colonists often ignored these proclamations and did as they pleased.  The colonists were not entirely satisfied with British governance in the Americans colonies, but they were largely free and prosperous so they did not complain.

Samuel Adams’ 1772 Rights of the Colonists stressed the rights of the colonists in three different respects: as men, as Christians, and as British subjects.  Adams’ piece is telling because it demonstrates that the colonists saw themselves as proud British citizens who shared a cultural heritage and political principles with their mother country. Tensions with Britain arose not because of differences in principle, but rather over who was implementing those principles—British Parliament or American colonial assemblies.

American colonists took a pragmatic approach to their relationship with Britain as evidenced by their response to the Townsend Acts (1767). First implemented in 1767, the Townsend Acts were a series of duties (taxes) enforced on certain British imports coming into America—such as paper, paint, lead, glass, and tea.

The burden of this tariff fell on American colonists. Resistance to the Townsend Acts took the form of boycotting British goods as well as public remonstrations, such as the protests that led to the Boston Massacre. Due to the strong American opposition, Britain repealed almost all of the Acts in 1770—except for the Tea Act. After the repeal of the majority of the Townsend Acts, the colonists largely accepted British rule. The colonists recognized their shared history with Britain, but more heavily valued the economic prosperity they enjoyed as colonies. As long as the British did not encroach on their relative political and economic autonomy, the American colonies were content as British subjects.

A Threat to American Freedom

The Coercive Acts, also known as the Intolerable Acts, were a series of British laws passed in the spring of 1774 intended to assure control of the increasingly unruly American colonies. The Coercive Acts consisted of four separate pieces of legislation that all greatly increased British power in the colonies.

The Acts explicitly affected the colonies by:

The glaring difference between the Quebec Acts and the rest of the Coercive Acts is that the Quebec Act had no direct effect on American colonists. It makes sense that measures such as the Quartering Act—which allowed British soldiers to be housed in American homes—angered the colonists because it was a measure that directly diminished control over their own lives. The colonists, however, deemed the Quebec Act equally as intolerable because they perceived it as a direct threat to their colonial governments and the freedom they had previously enjoyed under British rule. If the colonists were primarily motivated by anything else other than economic and political freedom, then the Quebec Act would not have been regarded as egregious as the rest of the Coercive Acts.

These complaints are prominent in the Declaration of Independence. As one of the first accusations hurled at the British king, the Continental Congress attacks King George III claiming, that “he has refused to pass other Laws for the accommodation of large districts of people, unless those people would relinquish the right of Representation in the Legislature, a right inestimable to them and formidable tyrants only.” This passage is clearly referencing Britain’s treatment of her Canadian province. The Declaration of Independence does not mince words when it comes to making direct complaints at King George. If the colonists were incensed by British religious or land policy in Canada, then one would suspect such frustrations to make an appearance in the Declaration. However, the only allusion to the Quebec Act in the Declaration is the previously mentioned excerpt that regards the colonial fear that Britain had a history of tyranny and denying her subjects appropriate representation.

By itself, the reference to the Quebec Act in the Declaration of Independence carries a lot of weight. The Declaration unified colonial complaints against Britain and lodged them against the king all at once. Since fear over the Quebec Act made it into the Declaration, the concern was both real and significant. This concern is amplified when coupled with other evidence proving that the Americans valued the economic and political freedom that their relationship gave them, as well as the divided history the colonies had with respect to religious and land polices. All put together, it becomes clear the worry that Britain would restrict American political and economic freedoms was the greatest and most significant reason the Quebec Act drove the American colonies towards independence.

One response to “The Quebec Act”

Politics of Transparency and Secrecy: Revisiting the French Revolution