American poet Phillis Wheatley spent the majority of her life embroiled in a clash of cultures. Her poetry revealed much about colonial society in eighteenth century New England and its hierarchal relationships. As a Christian, a slave, a woman, a poet and an African, Wheatley experienced discrimination on several fronts. Her poetry gave insight into marginalized groups in colonial America often silenced due to illiteracy.

The details of Wheatley’s life in Africa, including her date and place of birth, are hazy. In 1761, at about six years old, she was transported from West Africa to Boston on the slave ship Phillis. Her buyers, John and Susannah Wheatley, named her after her slave ship. Her name served as a constant reminder of her status as a slave and piece of property.

Below, Vincent Carretta, English Professor at the University of Maryland, discussed the life of Phillis Wheatley:

Early in her life, John Wheatley noted that Phillis had a “curiosity” to learn. The Wheatleys were inclined to provide her with a basic Western education in English, poetry, arithmetic, and philosophy. Most slaves, as well as many poor white Americans, did not acquire her level of education. Parts of the United States already had laws in existence that made it illegal to teach slaves to read. South Carolina passed an act in 1740 prohibiting the literacy of slaves, calling it a “great inconvenience” for whites. Phillis’ literacy and education was abnormal.

Although the Wheatleys appeared to treat Phillis humanely, they should not be regarded as progressives– they purchased her, held her in captivity, and it was likely they bestowed Wheatley with an education because they saw her as an anomaly amongst Africans. They began to “show her off” as an “exotic curiosity” to prominent Boston society for their own profit. Wheatley had the chance to “converse with learned men about literature and significant topics of the day, gaining a reputation as a lively and brilliant conversationalist,” but as a curiosity, she was seen as entertainment rather than a respected intellectual.

Wheatley went to London in 1773 to recuperate from tuberculosis, most likely contracted on the slave ship where contagious diseases were rampant. In London, she found an audience in high English nobility, including the Countess of Huntingdon, Selina Hastings. The Countess, despite being a slave owner herself, was a supporter of several African writers, including Olaudah Equiano. With Hastings’ financial backing, Wheatley published her first book, Poems on Various Subjects Religious and Moral, that same year. 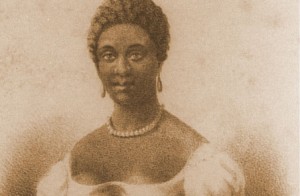 A year prior in 1772, Susanna attempted to publish Phillis’ work in Boston. It was met with skepticism: many could not believe a common slave girl was capable of writing poetry, and charged the book as a fraud published under a slave’s name to increase hype and intrigue. The disbelief was so enormous that a special committee was set up to test the legitimacy of Phillis’ authorship. Henry Louis Gates, a leading historian and literary critic at Harvard University states: “If she had indeed written her own poems, then this would demonstrate that Africans were human beings and should be liberated from slavery. She was auditioning for the humanity of the entire African people.”  The committee was eventually satisfied that Wheatley was the author of her poems, and ended the session.

The book sold very well in America and England, and had eleven editions printed between 1773 and 1838. Wheatley was invited to King George III’s royal court, but was obligated to cut her international tour short and return to her mistress’ bedside after Susanna fell ill.

Criticism and Wheatley’s Views on Slavery

Modern scholars attempt to reconstruct Wheatley’s thoughts about race in America through her poems. This can be difficult because Wheatley’s poems were consciously written for an eighteenth century white slave-owning audience. Applegate posits Phyllis’ ambivalence toward slavery was due to “the kind circumstances of her life while living with the Wheatleys giving her no reason to be angry at being brought to America. One poem in which Wheatley divulges rare negative thoughts on her enslavement is in “To The Right Honorable William, Earl of Dartmouth,” in which she describes her capture:

I, young in life, by seeming cruel fate
was snatched from Afric’s fancied happy seat:
What pants excruciating must molest
What sorrows labor in my parent’s breast!
Steeled was that soul, and by no misery moved,
That from a father seized his babe beloved:
Such, such my case. And can I then but pray
Others may never feel tyrannic sway?

Other poems expressed gratitude about being transported to America from “the land of errors,” as she calls Africa. She expressed thankfulness for her Christian conversion. Because coming to America also marked her enslavement, many modern scholars have found her exuberant patriotism and simultaneous silence on slavery to be a betrayal of her race. For instance, in the poem To the University of Cambridge, in New England she writes:

Twas not long since I left my native shore,
The land of errors and Egyptian gloom:
Father of mercy! ‘twas thy gracious hand
Brought me in safety from those dark abodes

Starting in the 1960s, with the recognition of African American history as a distinct field of study, scholars like Eleanor Smith, a professor of African-American Studies at the University of Cincinnati, claim Wheatley “had a misconception of her real relationship to white society” which gave Wheatley “a false sense of security which she accepted graciously.”  Saunders Redding, a former English professor at Brown University, describes Wheatley’s poetry as devoid of personality or emotion, and views Phillis’ ignoring of her race as giving her poetry a “negative, bloodless, unracial quality.” He saw Wheatley as a “spirit-denying-the-flesh” in refusing to talk about her slave status in her poetry, and missing a prime opportunity to share her experiences with the white public, as Olaudah Equiano did in his widely read autobiography, An Interesting Narrative of the Life of Olaudah Equiano.

Where modern scholars criticize Wheatley for being ‘too white,’ Thomas Jefferson found the opposite problem in her work. In his Notes on Virginia, Jefferson reveals his belief in the inherent inferiority of Africans, stating that he does not see them as capable of producing great works of writing. “Religion indeed has produced a Phyllis Wheatley; but it could not produce a poet. The compositions published under her name are below the dignity of criticism.” According to Jefferson, although Phillis may have the ability to write, her poetry is not the product “of intellect and reflection.”  In his mind, her work was dull and uninspired, giving even more reason to Jefferson’s argument that slavery was not ‘inhumane’ as he did not see Africans as fully equal to white humans to begin with.

In this lecture from Yale University, Professor Paul Fry examines trends in African-American literary criticism through the lens of Henry Louis Gates, Jr. and Toni Morrison. He provides an overview of African American literature and criticisms of it. 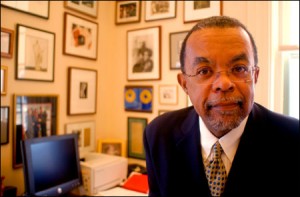 Wheatley probably felt less restricted to discuss her true feelings towards slavery after she was granted her freedom. In a short letter written to Reverend Samson Occum in 1774 depicts Wheatley hints at her frustration during the beginning stages of the American revolution. She found colonists hypocritical as they embraced rhetoric of liberty and freedom while enslaving others. Viewing this hypocrisy “a strange Absurdity,” she writes, “’in every Human breast, God has implanted a Principle, which we call Love of Freedom…How well the Cry for Liberty, and the reverse Disposition for the exercise of oppressive Power over others…” Therefore, Wheatley’s silence on the issue of slavery in her poetry should not be taken as compliance in the institution but rather a hesitation while she was enslaved.

I have this Day received your obliging kind Epistle, and am greatly satisfied with your Reasons respecting the Negroes, and think highly reasonable what you offer in Vindication of their natural Rights: Those that invade them cannot be insensible that the divine Light is chasing away the thick Darkness which broods over the Land of Africa; and the Chaos which has reign’d so long, is converting into beautiful Order, and [r]eveals more and more clearly, the glorious Dispensation of civil and religious Liberty, which are so inseparably Limited, that there is little or no Enjoyment of one Without the other: Otherwise, perhaps, the Israelites had been less solicitous for their Freedom from Egyptian slavery; I do not say they would have been contented without it, by no means, for in every human Breast, God has implanted a Principle, which we call Love of Freedom; it is impatient of Oppression, and pants for Deliverance; and by the Leave of our modern Egyptians I will assert, that the same Principle lives in us. God grant Deliverance in his own Way and Time, and get him honour upon all those whose Avarice impels them to countenance and help forward tile Calamities of their fellow Creatures. This I desire not for their Hurt, but to convince them of the strange Absurdity of their Conduct whose Words and Actions are so diametrically, opposite. How well the Cry for Liberty, and the reverse Disposition for the exercise of oppressive Power over others agree, —

I humbly think it does not require the Penetration of a Philosopher to determine.”

Religion played a large role in Wheatley’s life in colonial America. Christianity allowed Wheatley to find common ground and language between herself and her white audience. One of her first poems to gain renown in both England and America was an elegy of George Whitefield. Whitefield was a Methodist preacher revered by Countess Huntingdon, who agreed to fund the publication of Wheatley’s book. View the poem in its original form here.

Twenty of her fifty five poems were elegies like the one above, elegant mourning poems whose purpose was to comfort the loved ones of the deceased, and by Phillis’ hand, they often featured the drudgery of mortal life being compared to the happiness of going to heaven, as well as a God that was “benevolent, just, and merciful,“ accepting of Africans in ways that whites on earth were not.  Her preoccupation with death and the salvation of the afterlife leads Paula Bennett to make the conclusion that Wheatley hoped “she would be compensated after death for the pain she suffered in life.”  Some scholars have noted that the very front-piece illustration of her published book, depicting Wheatley seated at a table, quill in hand and looking into the horizon as though in full intellectual thought, is a sort of silent protest in its own right, acting as “quiet refutation, like that of the poems, of the tacit prejudice…that blacks were incapable of being fully intelligent and respectable humans.”

Phillis, as an educated African slave, walked precariously between two worlds, never fully belonging to either. She showed promise as a writer and a thinker, but due to her race, was never accepted into contemporary white society, yet was not a good representation of the average slave’s life in colonial America either.