As a student and as a teacher, I have found that bringing objects into the classroom – whether literally, or merely as images projected onto a screen – makes for a much more engaged group of students. Students enjoy flexing their own intellectual muscles, deducing information through visual analysis, being challenged to discover rather than merely taking down information. Artifacts are historic facts, but because they are less abstract than the written word, students often relate to them more readily. And objects have things to tell us that documents cannot. Looking at and learning about historic objects gives tangible form to the intangible past and brings it alive for students.

Teaching What to Ask

What objects have to tell us depends to a great degree upon what questions we ask of them. Therefore, when teaching with objects, it is important to instruct students in visual analysis. They can begin by examining the object and asking the basic questions: What is this? What is it made of ? Why does it look the way it does? Who made it? When and how? And why? Inquiry can then dig much deeper, into the realm of cultural values, cultural assumptions (our own and those of the object’s original makers and users), and symbolic meanings.

Imagine the following scene: the place, a college classroom, the subject, a survey course in American history; the time, near the end of the semester. The instructor displays the object shown below, and asks his students to describe what they see, and what they can make of it. 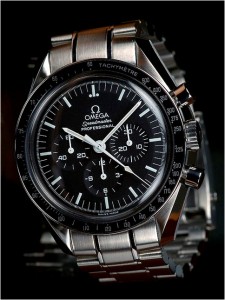 It is, obviously, a wrist watch. A man’s wrist watch. Some will guess that the case is steel. It has the insignia “Omega” on the dial, which tells us who the manufacturer is. The works appear complex: the French word “tachymètre,” inscribed on the bezel, probably conveys nothing, but sounds impressive. It is clearly a factory-made, mass-produced object, an object with a brand name attached, and a model name (“Speedmaster Professional”) as well. But unless they have studied either the history of fashion or of timepieces in particular, students will probably not be able to date it.

Objects can best be understood in terms of their historic context; if the students approach them without any background knowledge at all, the objects in turn will reflect little light back upon the past. In this instance, a view of the back of the watch case is enlightening. 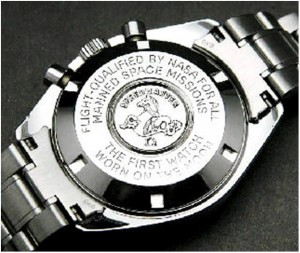 Presumably the students in this course will have recently studied the beginnings of the Cold War, our participation in the Korean and Vietnam Wars, and John F. Kennedy’s promotion of the space race. Prior to seeing the watch, it would be helpful for students to view a video of the moon-landing, and perhaps a clip from the October 21, 1960 Nixon-Kennedy debate.

It must be self-evident that, when choosing objects to use in teaching, a history instructor would make use of those objects that illuminate the historical moment, figure or event under study.

After seeing the inscription on the case, students will appreciate that this is not just any watch. It is a souvenir of a political and technological contest between Soviet Russia and the United States. It is also a encapsulates a political struggle between two American parties striving to win public approval, in which the space race first became a platform issue for one successful presidential candidate, and later a public relations boon for his opposing successor.

Whenever possible, students should be encouraged to indulge their own speculations and make their own discoveries about the meanings of objects. But when and where they are stalled in recognizing the many things an object may have to tell them, it is for the instructor to prompt them. What did it mean to own a replica of the watch worn on the moon? Did it make the wearer like one of the space explorers, brave and adventurous? What did it mean to be an American wearing this watch? What did it convey about American science, technology and power?

This object is a fetish: it seemingly empowers the wearer through magical association with extraordinary people and events. An instructor may wish to bring in some material that helps students understand to what extent advertising copy makes use of fetishistic thinking.

Here is a newspaper advertisement for the Omega Speedmaster from 1967, when NASA had already used the watch in space, but before man had reached the moon. 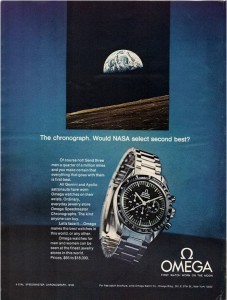 Students, if asked about the wording and imagery used in these advertisements, should readily understand that the Omega company (now Swatch) made consummate use of  the watch’s historical associations, not only to America’s space exploration, but also the iconic figure of the murdered (and to many, martyred) President Kennedy. The object they can actually purchase is, after all, not the watch that Buzz Aldrin wore on the moon (which was mysteriously lost) but, according to Omega’s website “likethe original Moonwatch, it has a stainless steel case, a shatterproof Hesalite crystal and the full chronograph function which make the Speedmaster famous” (italics mine).  A clip of the October 21, 1960 Nixon-Kennedy debate, in which the issues of the space race is raised, is available on YouTube. Aldrin’s watch itself was only unique in that it was the one he w as wearing when he stepped onto the moon’s surface: NASA officials selected the Omega Speedmaster as most likely to withstand the rigors of space travel, and contracted with the company to supply their astronauts with Speedmasters, mass-produced, identical and interchangeable.

Hopefully, in their first, cursory examination of the watch, students will have observed that it is a man’s watch: the fact that wrist watches are gendered in their design, with men’s watches made larger and bulkier than women’s, is part of our current store of commonly-shared cultural knowledge. Using this fact, the instructor can set the historical ball rolling again by mentioning the fact that until the 1980s, there were no female astronauts, and that in the 1960s, space exploration was considered unsuitable for women. But the woman’s liberation movement was heating up. Since the students have been studying the turbulent, activist 60s, they ought, with some prompting, to be able to discuss the watch as a signifier of historic gender discrimination as well.

A friend of mine was given a Moonwatch around 1975, at which time it cost a little over three hundred dollars. It currently sells, brand new, for $3,500, while vintage Moonwatches like his can sell for nearly twice that amount. Some facts that could be presented to students: in 1975, a new Ford four-door sedan sold for $3,061.  This watch would have cost about the same amount as a top-of-the-line turntable, a king-sized mattress, or a seven-night hotel stay on the Bahamas.  Ten Moonwatches equaled the cost of one car. Students will appreciate the watch as a luxury item, a status symbol, an object which only the few could afford, either at the time of the moon-landing or now. Association, through objects, with such momentous events, does not come cheap. It takes one small step for man, one giant leap for the wallet.

Ironically, my friend informs me that his has never kept good time. Its function has always more symbolic than anything else.

For a book list on material culture, please consult the Meanings of Things’ bibliography

I have chosen here to interpret the Moonwatch primarily as evidence of cultural responses to the socio-political trends in the 1960s and 70s. Obviously, it could be viewed in other contexts: for example as having a particular place within the history of American time-keeping, from the sundial to the standard-time railway schedule, from the factory-bell to the punch-clock, from the village tower-clock to the satellite signals sent to today’s mobile devices. If we were examining the Moonwatch in this relationship, we would be interested in the nature of its works (hand-wound, pre-dating both the self-winding feature and the quartz crystal movement) and in how representative a timepiece it was in 1970s America. The context in which an object is viewed determines the nature of our inquiries into it.

Any history teacher who wishes to incorporate material culture into his/her lesson plans can  search available databases for appropriate articles from material-culture based journals (some of which I have listed below).  They may also consider consulting the curators of local history museums and historic societies about relevant objects the institutions may hold in their collections. Most elementary school students have the experience of being taken on a field trip to a history museum where they see a recreated colonial or pioneer kitchen, witness a demonstration of the spinning wheel, blacksmithing, or some other handcraft, and learn through re-enactment, how people ate, worked, dressed “back then.” Unfortunately, instead of taking this material-culture based learning experience to more sophisticated and adult levels as students move into secondary school and beyond, it is generally abandoned. As the history profession is becoming more receptive to material culture studies, and beginning to acknowledge that the field employs a set of methodologies as rigorous and exacting as the more traditionalist interpretations of documentary evidence, secondary and college-level instructors can mine the field and enrich their student’s classroom experiences.