John Muir (1838-1914), a self-described “poetico-trampo-geologist-botanist and ornithologist-naturalist” was a Scottish American naturalist, preservationist, and explorer.  Muir contributed to studies of the natural world throughout his extensive travels across America, Canada, Europe, Asia, and South America. His travels often took him to less explored corners of North America, including the Yosemite Valley, the High Sierra Nevada Mountains, the San Gabriel Mountains, the Cascade Mountains, the San Juan Islands, and Alaska. Muir did what few explorers before him had by connecting American citizens to the places few were fortunate enough to experience through writing that gained him widespread recognition. More than provide entertainment in highly regarded publications, Muir’s writing ignited an American interest in land preservation, so influential it inspired President Theodore Roosevelt’s unprecedented land management actions. Muir oversaw America’s greatest land preservation triumphs, continued today by his organization the Sierra Club, and his efforts remain unmatched by any individual or organization since.

John Muir’s love of nature was awakened at an early age in Scotland, where he spent his days exploring the coastline and countryside near his home. Fascinated by the American natural history he read of at Dunbar Grammar School, Muir’s interests were realized when his family emigrated from Glasgow to New York , eventually settling in Wisconsin.  His father, a Presbyterian minister later turned Calvinist, was strict on his eight children, and it is believed Muir found respite from his harsh manner in nature.  In My Boyhood and Youth, Muir wrote that his childhood and adolescent appreciation of nature was rooted in a “natural inherited wildness in our blood.”  His curiosity of the natural world continued at the University of Wisconsin, where he became consumed by geology and botany.

The “wildness” lead Muir on adventures that provided a foundation for his later work in land preservation. While evading the Civil War draft in the Canadian province of Ontario, Muir conducted extensive botanical research, discovering and publishing his first work on Calypso borealis, a rare orchid.  After returning to the United States and finding work at an Indiana factory, Muir was temporarily blinded in an accident. The loss of his vision promoted him to forgo work in pursuit of adventure. In 1867, Muir walked 1,000 miles from Indiana to Florida, stopping along the way to create botanical sketches.  The journey was chronicled in his book A Thousand-Mile Walk to the Gulf. Muir traveled from Florida to Cuba, from where he set sail to San Francisco. Once in California, Muir ventured into the High Sierra Nevada mountain range. It was here that Muir felt an “unconditional surrender” to nature, a feeling that lead him to his understanding of religion and nature as interconnected.  Later, when teaching Sunday school, Muir taught botany rather than scripture to emphasize creation.  Muir’s religions awakening inspired a yearning to discover more of America, and soon after, Muir made his first visit to the Yosemite Valley, the place that drove his work in preservation, and where he spent much time in the following years.

After years in Yosemite, Muir settled in the San Francisco area and married Louie Wanda Strentzel, with whom he established a ranch and orchard. He devoted his time to writing, and regularly contributed to publications such as Overland Monthly, Scribner’s, Atlantic Monthly and Harper’s Magazine, familiarizing Americans with the remote areas he traveled to. Muir’s writing gained him widespread recognition and visits from the likes of Sir Joseph Hooker, Ralph Waldo Emerson, and famed Harvard Professor of Botany Asa Gray. His work that garnered the most attention was that on the protection of Yosemite. In 1864, in the United State’s first wilderness preservation movement, President Abraham Lincoln signed the Yosemite Grant, which designated the valley as a state park land.  Muir’s articles “The Treasures of Yosemite” and “Features of the Proposed Yosemite National Park,” both featured in Century Magazine, facilitated the movement to successfully establish Yosemite as a National Park in 1890.

Muir’s successful efforts to establish Yosemite National Park launched further preservation efforts in the last decade of the nineteenth century. In “The Hetch Hetchy Valley,” published in the Sierra Club Bulletin Muir later wrote, “it is impossible to overestimate the value of wild mountains and mountain temples as places for people to grow in, recreation grounds for the soul and body.”  His belief that nature played an intrinsic role in human development motivated his actions to preserve it. Muir played an instrumental role in the campaigns to establish Sequoia National Park, founded in 1890, and Kings Canyon National Park, whose fruition took another half century. Following extensive mountaineering in the Pacific Northwest, Muir adopted the campaign to form Mount Rainer National Park, established in 1899. Other National Parks that benefitted from his writings include Petrified Forest and Grand Canyon National Parks. Alongside the U.S. Forestry Commission, he participated in surveys of Yellowstone, the Black Hills, the Cascades, the Sierra Nevada, and the Grand Canyon.

Muir’s most notable contribution during this period was the founding of the Sierra Club in 1892. Muir established the Sierra Club, which he served as the first president of until his death in 1914, “to make the mountains glad.”  The Club’s intent was to facilitate the organized establishment of National Parks and a National Wilderness Preservation System. The Sierra Club contributed to fostering widespread interest in land preservation, most notably from President Theodore Roosevelt. In 1903, Roosevelt took a three-day camping trip with Muir, on which Muir convinced the President to place the Yosemite Valley under federal protection.  Muir and his founding of the Sierra Club provided inspiration for many of President Roosevelt’s conservation efforts, which lead to the protection of 230,000,000 acres of land.  Among these included the creation of the U.S. Forest Service and the establishment of Federal Bird Reserves, National Game Preserves, National Forests, National Parks, and the American Antiquities Act of 1906, which established National Monuments. 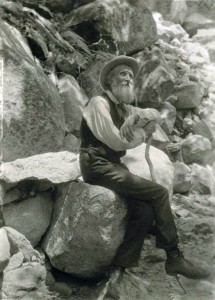 Muir’s last great attempt at wilderness preservation was Hetch Hetchy, a glacial valley to the north of Yosemite National Park. Following the 1906 San Francisco earthquake and fire, the city was in dire need of water. Hetch Hetchy, which flowed into the Tuolumne River, offered San Francisco a needed resource. Muir attempted to stop the damming of Hetch Hetchy, which would create a reservoir to provide San Francisco with water. Muir fought “San Francisco capitalists…doing their best to destroy the Yosemite Park, the most wonderful of all our great mountain national parks,” but lost when the city gained control of the water source.  Although Muir was unsuccessful, the failure to stop the damming of Hetch Hetchy sparked a new wave of environmental activism. Since the construction of the O’Shaughnessy Dam, citizens have successfully halted proposed damming in other National Parks.  Inspired by Muir’s early actions, efforts to restore Hetch Hetchy are under consideration today.

When John Muir died in 1914, he left a legacy that extended beyond the contributions he made to preservation in his lifetime. In 1915, the Sierra Club was awarded $10,000 to construct the John Muir Trail, a long-distance footpath through the Sierra Nevada’s that connects the Yosemite, Kings Canyon, and Sequoia National Parks, and terminates at Mount Whitney, America’s highest peek.  Following Muir’s death, some of his most influential work, including A Thousand-Mile Walk to the Gulf, Travels in Alaska, and Steep Trails, was published, further instilling an appreciation for wilderness areas less traveled to in mainstream America. His work directly inspired many to donate lands for preservation, such as Moran State Park on Orcas Island, Washington.  The tributes left in his honor, the John Muir Trail, John Muir College, and John Muir Memorial Association to name a few, reflect his greatest contribution. At the turn of the century, when America was consumed by capitalism, Muir sought to “let children walk with nature,” for future generations to appreciate its “divine harmony.”  While he succeeded in preserving America’s most beautiful and abundant lands in unprecedented ways, his vision of nature changed the way the Americans perceived their natural surroundings and preserved them for generations to come.

A Passion for Nature: The Life of John Muir, Donald Worster

Nature Writings: The Story of my Boyhood and Youth; My First Summer in the Sierra; The Mountains of California; Stickeen; Essays, John Muir, William Cronon