“Who is James K. Polk?” jeered Whig presidential candidate Henry Clay in 1844 when the Democratic nomination went to the relatively-unknown Tennessean.  Former President Martin Van Buren (1837-1841) had been considered the front-runner going into the Democratic National Convention, but Polk, a former Speaker of the House and Governor of Tennessee, emerged as the “dark horse” candidate.

It’s difficult to imagine a president like James K. Polk today.  Polk set just four explicit goals for his administration. Furthermore, he pledged not to seek reelection.  As shown here, he narrowly defeated Henry Clay to secure the presidency.  Over the next four years, he fulfilled each of his promises and true to his word, stepped down after just one term.

Polk called the goals of his presidency the “four great measures”:

1.  End the dispute with Great Britain over the Oregon Territory
2.  Reduce tariffs
3.  Establish an Independent Treasury
4.  Acquire California from Mexico

The Texas question was arguably the deciding factor in the 1844 election that brought Polk to power.

Texas gained independence from Mexico in 1836 and had been trying to join the United States ever since. Northern states, however, had no interest in allowing another slave state to enter the Union as its admission would upset the balance of power in the House and Senate.  Polk was the only candidate who strongly favored the annexation of Texas in 1844, and he offered an interesting compromise.  He appeased Northerners by also advocating the acquisition of the Oregon Territory from the British in present-day Canada—territory which would later form states barring slavery.

Before taking office, President-elect Polk was already at work on the annexation of Texas. The election had proved to the incumbent President, John Tyler (1841-1845), that public opinion favored the territorial addition, so he worked with Polk to make it a reality. 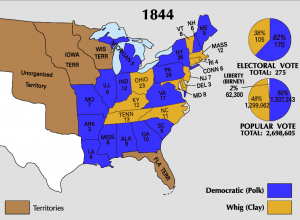 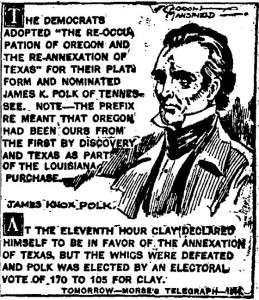 Just before Polk took office, Congress passed a joint resolution approving the annexation.  Within the year Polk and the Texan government achieved their goal.  Texas was admitted as a state on December 29, 1845.

Polk kept his promise to the North, and immediately began negotiations with the British regarding . Since 1818, the territory had been under joint occupation of both the United States and the British Empire.  The Democratic Party aroused the expansionist sentiment of the American people with the slogan “54-40 or fight!”

The Democrats suggested that all of the Northwest up to Russian America (present day Alaska) belonged to the United States.  Previous administrations had failed to reach a compromise, but Polk was willing to negotiate.  He knew the British would not rescind their entire territory, so he instead proposed the 49th parallel.  At first the British refused, leading Polk back to the slogan “54-40 or fight,” even though he knew the U.S. could not withstand another war with Britain.  It was not easy (much of the struggle is documented in Polk’s diary), but eventually the British agreed to the 49th parallel without war, and Polk’s first great measure was realized.

The Oregon Treaty of June 15, 1846 ended the dispute and gave the United States lands that would someday comprise Oregon, Washington, Idaho and parts of Montana and Wyoming.

Although territorial expansion is what Polk is best known for, two of his four great measures were .  For decades, Whigs and Democrats had been feuding over tariff policy.  In general, the Whigs favored more protection while the Democrats favored lower tariff rates.  The “Tariff of Abominations” in 1828 and the Tariff of 1832 had increased protection.  The following year, the “Compromise Tariff” drastically reduced rates, hoping to cut import taxes down to 20%–the level set by the Tariff of 1816.  However, in 1842, the Whig Congress passed the “Black Tariff”.  Much to the Democrats’ chagrin, the law significantly increased protection and average tariff rates rose from the initial goal of 20% to 40% following the bill’s passage. 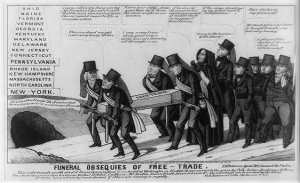 When Polk assumed the presidency, the Democrats saw their opportunity to repeal the law and reduce protection once again. 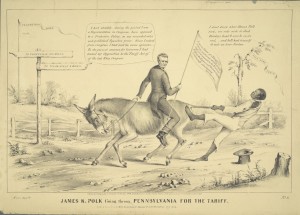 “James K. Polk Going Through Pennsylvania for the Tariff”

Polk instructed Secretary of the Treasury to provide plans for a new tariff to abolish the old one.  The President wrote that he was “in favor of a tariff for revenue, such a one as will yield a sufficient amount to the treasury to defray the expenses of government,” but, was “opposed to a tariff for protection merely and not for revenue.”  In July of 1846, the Walker Tariff passed, but not without opposition.  It significantly lowered tariff rates and gave the United States its first standardized tariff.

Late in 1845, Polk sent diplomat John Slidell to Mexico with an offer.

Polk wanted New Mexico and California and he was willing to pay to get them.  When news of this offer spread to Mexico City, Slidell was rebuked by the Mexican government. 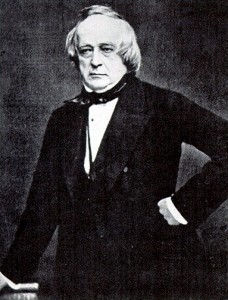 Polk learned of this in May of 1846, and immediately wanted war.  But Congress would have to be persuaded. Days before Polk planned to appeal to Congress for a declaration of War, he learned that Mexican troops had crossed the Rio Grande and killed eleven American soldiers.  This was the cause Polk had been waiting for; Congress quickly complied with Polk’s request and declared war.

The U.S. Army was able to quickly conquer New Mexico and California. However, Mexico was unwilling to cede these territories to the United States. Eventually, the U.S. Army captured Mexico City, where it forced the surrender of Mexican troops.

When the war ended in 1848, Mexico was forced to agree to Polk’s terms. Although some pushed for total annexation of Mexico, even Polk, the great expansionist, had his reservations. He sent Nicholas Trist to negotiate the Treaty of Guadalupe- Hidalgo (1848), which required the cession of California and New Mexico to the U.S. for the price of $15 million.

In March, 1848, the treaty was ratified by the Senate.  The United States gained California, Nevada, Utah, and parts of Arizona, New Mexico, Colorado, and Wyoming.  Expansionists had realized their dream of extending the United States to the Pacific Ocean.  But, many Americans were alarmed by the price, both in lives and in dollars, they had to pay to achieve it.

THE END OF POLK’S TERM

President James K. Polk’s greatest accomplishments culminated in the Texas Annexation, Oregon Acquisition, and Mexican Cession.  As promised Polk did not run for reelection.  In fact, he died of cholera just three months after leaving office.  Discussions of Manifest Destiny almost always center on the acquisition of Texas, Oregon, and the Southwest, but rarely on Polk’s role in obtaining them.  Although the events that occurred during his presidency are well- known, Polk himself is seldom discussed.