No historical event, idea or figure is ever safe from constant interpretation and reinterpretation. The presidency of Herbert Hoover is a terrific example of this phenomenon.  In his early presidency, he was vilified for exercising too much federal power during a time of isolationism; he was later vilified for doing too little during the Great Depression. Ramshackle, makeshift shelters were called “Hoover-villes,” but his name also graces one of the most magnificent dam structures in the world. So who was Hoover, the man, the myth, the legend? Was he a bumbling, inept idiot who plunged the country further into a Depression? Or was he a solid business man who did his best to save capitalism in the face of collapse? As is usually the case, the answer falls somewhere in the middle.

Hoover took office in March of 1929, just months before the first disastrous crash of the Great Depression. Prior to taking office, he had been a respected businessman, humanitarian, and the Secretary of Commerce under Presidents Harding and Coolidge. Hoover was an ambitious Secretary of Commerce and a strong proponent of “associationalism,” which encouraged voluntary partnerships between government and business. The thriving economy and Hoover’s business background gave his candidacy a huge boost. Unfortunately, his popularity would last mere months. In his inaugueration speech, Hoover proclaimed, “Given the chance to go forward with the policies of the last eight years, we shall soon with the help of God, be in sight of the day when poverty will be banished from this nation.” Noble intentions, but clearly not a mission accomplished during his tenure.

But contrary to popular belief, Hoover did try to alleviate the pain wrought by high unemployment. Hoover viewed unemployment as a local problem, and tried to solve it much the way he did in previous ventures: by promoting voluntarism and encouraging state and local governments to pursue public works programs. But the crisis was too much for local governments and private charities. When he did take steps that were far beyond the previous bounds of the federal government, his steps were tentative and the political backlash instant.  Hoover himself was nervous that his actions could “open the door to socialism and collectivism.” 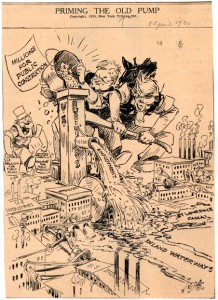 Herbert Hoover’s Influence on the New Deal by FORAtv

This clip from CSPAN is actually a segment from a longer program on Herbert Hoover. It features a Q & A with Profressor William Leuchtenberg, the William Rand Kenan, Jr. professor emeritus of history at UNC-Chapel Hill who has written extensively about FDR, the New Deal and, most recently, Herbert Hoover.