If you’re confused as to why World War I happened, you’re not alone. Historians have been debating why sectional tensions escalated into a World War since the 1920s. Many scholars believe that the origins of the Great War (28 July 1914 – 11 November 1918) lie in the arms race between Germany and Great Britain and land disputes within continental Europe which lead to a hostile diplomatic environment starting at the turn of the century. Other historians trace its genesis to 1871 with the unification of Germany and the establishment of the German Empire. Though there are many interpretations, the key event universally recognized as the major European accelerant into the First World War was the assassination of the heir to the Austro-Hungarian throne, Archduke Franz Ferdinand.

The assassination of Archduke Franz Ferdinand occurred in Sarajevo, Bosnia, on 28 June 1914 when a 19-year-old Serbian nationalist, Gavrilo Princip, shot the Archduke and his wife, Sophie. The assassination was a defiant act of protest against the Austro-Hungarian imperial presence in the Balkans. Princip, along with his co-conspirators in the secret society the “Black Hand,” (funded by the terrorist organization Young Bosnia) hoped to inspire the people of the Balkans to revolt. They believed the Serbs would be able to create their own independent nations.

The Black Hand was under the direction of Colonel Dragutin Dimitrijevic, Serbia’s Chief of Intelligence— a connection that lead Austrian officials to mistakenly believe that Serbia was cognizant of the assassination plot, therefore turning the double murder into state-run terrorism.

Given the already-fractured state of European politics and the complex alliance system established during the arms race, this act set in motion a chain of events that forced the major powers into the most devastating war the world had ever seen. As Inspector General of the Austro-Hungarian Army, the Archduke arrived in Sarajevo to inspect an army regiment in Bosnia. Despite unrest in the country, he and his wife, Sophie rode side-by-side in an open carriage throughout the capital of Sarajevo.

As they paraded through the streets, seven members of the Black Hand immersed themselves in the crowd waiting to attack the carriage with hand grenades and revolvers. Of the seven assassins, only one committed and hurled his grenade but it bounced off the carriage and missed; perhaps expecting wine and roses, the Archduke yelled “So you welcome your guests with bombs?!” Although this assassination attempt was unsuccessful, other Black Hand members remained at the ready, including Pricip, who would seize his opportunity later that day. Still riding in an open carriage, the Archduke’s motorcade came to a stop next to Princip who approached the carriage, pulled out his revolver and killed the Archduke along with his wife, Sophie. 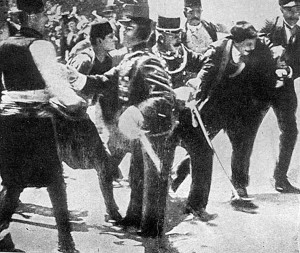 The following video presents the buildup to World War I and the assassination of the Archduke Franz Ferdinand. The videos are part of the documentary series of infamous assassinations previously aired on the History Channel.

One month later, on July 28, Austria-Hungary declared war on Serbia in response to the Archduke’s murder, deeming them responsible. The conflict might have remained centralized in the Balkans had it not been for an elaborate series of treaties that divided Europe into two hostile camps. In the years prior to 1914, European nations scrambled to obtain colonial possessions overseas creating a complicated web of alliances in order to gain military control over Europe. Prior to the assassination, Austria-Hungary, Germany and Italy (constituting a group known as “the Triple Alliance”) promised to come to the aid of each other if attacked. 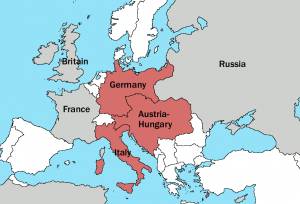 However, Italy would opt out of this alliance to honor their pact with France. In the aftermath of the assassination, the Ottoman Empire replaced Italy to create the “Central Powers” with Austria-Hungary and Germany. Austria-Hungary’s declaration of war on Serbia forced Russia to abide by their treaty with Serbia and enter the war. France and Britain allied with Russia to create the Triple Entente, after Germany’s invasion of Belgium and threat to the French border.

John Merriman, Professor of History at Yale University, lecturers on the origins of World War I in his “France Since 1871” course.

This entangled web of complicated alliances and treaties between the European nations accelerated the buildup to war; was a fierce competition among the major powers in Europe to create the strongest economies, the largest militaries, and the greatest colonial empires. If Archduke Ferdinand provided the catalyst for WWI, Germany may have provided the roots: some historians believe that the tense buildup to 1914 began with the establishment of the German Empire at the end of the Franco-Prussian war of 1870 – 1871. The new empire acquired the two former French provinces of Alsace and Lorraine and ultimately reformed the distribution of power in Europe. The economic and political rise of Germany alarmed the other European powers. As new nations and boundaries formed at a dizzying pace, nationalist fervor swept through Europe. 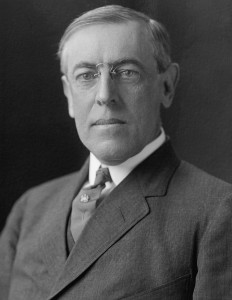 Americans, on the other hand, generally preferred neutrality, particularly because they were divided on the issue of war since many could trace their ancestry back to Britain or Germany. In a speech before Congress on August 19, 1914, President Wilson assured the nation that he was committed to neutrality:

The United States must be neutral in fact, as well as in name, during these days that are to try men’s souls. We must be impartial in thought, as well as action, must put a curb upon our sentiments, as well as upon every transaction that might be construed as a preference of one party to the struggle before another.

The United States would remain neutral for the majority of the war, although economic support and trade with the British Empire and France kept the nation connected to the conflict. By 1917, neutrality was no longer sustainable, given German submarine attacks on passenger vessels such as the Lusitania and the Sussex.

These attacks, coupled with German communications with Mexico in the infamous “Zimmermann telegram,” proved to be the last straw for Wilson. In a speech before Congress, he announced the U.S. entry into The Great War, just three years after his neutrality speech.

Neutrality is no longer feasible or desirable where the peace of the world is involved and the freedom of its people, and the menace to that peace and freedom lies in the existence of autocratic governments, backed by organized force which is controlled wholly by their will, not by the will of their people. We have seen the last of neutrality in such circumstances.

Wilson insisted: “The world must be made safe for democracy.” Congress agreed, and the war resolution passed overwhelmingly in both the Senate (82 – 6) and the House (373 – 50).

After the German forces tore through Belgium and into northern France, the war became a prolonged stalemate. Before the United States entered the war, the Central Powers and the Triple Entente were evenly matched. The advances in science and technology in the opening years of the twentieth century led to new military technologies such as airplanes, machine guns, tanks, submarines, and poison gas. This new weaponry of the twentieth century produced unprecedented slaughter. As both armies stalled on the French battleground, they dug trenches to protect themselves from machine-gun fire. Trench warfare proved to be a brutal experience as many of the soldiers who did not die in combat surrendered to disease.

World War I also proved to be a turning point in Western history as it laid the groundwork for World War II. In Russia, the tsarist autocracy collapsed and a Soviet state took its place. The emergence of fascist movements gripped Italy and Germany. Perhaps the most notable observance that came out of The Great War was the killing and slaughtering of an entire generation and the technological ability to destroy life on an entirely new level. It ultimately led many to question the Enlightenment belief in progress of Western civilization.