Following World War II, the early Cold War era was marked by a polarizing gender ideology. Women who had entered the manufacturing industry at unprecedented numbers during the war effort, left or were pushed out of higher education and the workforce. Elizabeth Singer More, Professor of Women, Gender, and Sexuality Studies at Harvard University, emphasizes the equation of national security with the maintenance of a heterosexual, middle-class family structure. According to Singer More, “There was an universal idea of female primacy in the home for the good of their children and the good of the nation.”  The choice to stray from a domestic life was regarded “as destabilizing, threatening, and incomprehensible,” and as the politics of the home and family came to represent the nation’s, women were held responsible for national security through their roles as wives and mothers.


Working women posed a threat to national security. Bearing children seemed a matter of national security as keeping the population levels afloat meant ensuring there would be a younger generation to defend the nation if there was combat with the Soviet Union. Additionally, in the nuclear age, a sense of urgency surrounded science, and budding scientists were encouraged to make it their only undertaking. In “Women and Scientific Investigation,” Hygeia Magazine, published by the American Medical Association, wrote that women “are just as capable as men” in the sciences, but they should only pursue such careers if they did “not wish to contribute” their “part toward the continuation of the race.” “If her interest in her work is absorbed as it should be,” the magazine asserted, “she will not be able to interrupt it with the usual functions of the woman in the marriage partnership.” Forced to choose between career and family, most women selected to become wives and mothers.

Women obliged to their new duty, marrying at the average age of twenty and bearing children at a birthrate comparable to India’s; but a quiet dissatisfaction swept many housewives across the nation.  In The Feminine Mystique, published in 1963, Betty Friedan identified the unhappiness as “the problem that has no name.” Friedan developed the idea of the “feminine mystique,” the image of the happy housewife, as a political creation constructed by male writers and editors to portray women as ‘fulfilled’ in their homes that lead housewives to believe this was their only destiny.  The image of the housewife that came to define women in the 1950’s where they were “seen only in terms of their sexual role,” was not only entirely a “product of men’s minds,” but a sharp reversal from the portrayal of women in years past.  “No one,” Friedan writes, “seemed to remember that women were once thought to have the capacity and vision of statesmen, poets, and physicists.”  The illusion of the fulfilled housewife that graced magazine covers replaced images of the “’career girl” heroines depicted in decades past.

Friedan attributed this shift to the end of World War II and the beginning of the Cold War.  Prior to World War II, women’s mobility was supported by first wave feminism during the nineteenth and early twentieth centuries, and then throughout WWII by jobs vacated by men in service. Upon the return of men from war, women were laid off or encouraged to surrender wartime jobs to ease male readjustment. More than restoring men as providers, the numbers of women who vacated the workforce instilled a sense of American stability. Men, prevented “by depression and then by war from marrying” were as eager for domestic life as girls who had come of age during the “lonely years” of World War II.  In the years following the war, domesticity and stability at home counteracted the political uncertainty and fear that prevailed across America.

Acknowledging that “very little of what I’ve done has been really necessary or important,” one housewife observed to Friedan that, “In the past fifty years we have come full circle and the American woman is once again trapped in a squirrel cage.”  In 1959, Redbook published the article, “Why Young Mothers Are Always Tired,” which described fatiguing jobs as “those which only partially occupy the worker’s attention,” resulting in a “mental grey-out” comparable to sleep walking.  Friedan reported high rates of depression among mothers, writing that young housewives during the 1950’s became the group predominantly faced by all “psychiatric and psychosomatic disorders with increasing severity.”  Questioning why they felt such dissatisfaction when they had everything they had been told to wish for, one housewife voiced what many others felt, “I just don’t feel alive.”


As more women were funneled into the role of “housewife,” their sheer numbers strengthened the revival of functionalism. Friedan explains functionalism as the idea that “a social order can function only because the vast majority have adjusted themselves to their place in society and perform the functions expected of them.”  As more women complied with the feminine mystique and gave up other career ambitions to care for their families, the female “purpose” was equated with the idea of a housewife. “A woman’s function, asserted Adlai Stevenson in his 1955 Smith College commencement address, was through her role as wife and mother. The patriotic duty of women during the Cold War was their “unique opportunity to influence…man and boy” from within the home, Stevenson told the young female graduates.

As prominent politicians and popular magazines promoted the idea that the female sex had one purpose, women bought into the idea that they existed in a strictly sexual role. One college student told Friedan, “I don’t want to be interested in a career I’ll have to give up.” Perhaps, she suggested, “Education is a liability. Even the brightest boys at home want just a sweet, pretty girl.”  Her words held true among women in higher education. While two thirds of women who attended college dropped out, the majority of those who graduated aspired to be wives and mothers, a desire rooted in functionalism that portrayed women only in terms of biology.


Functionalism initiated the reinterpretation of female higher education. Friedan writes that “a number of educators suggested seriously that women no longer be admitted to the four year colleges and universities,” as men would reap more benefits from limited spots.  Not only would education had better serve men, it would blemish a women’s femininity. A Smith student explained to Friedan, “Our parents expect us to go to college…but a girl who got serious about anything she studied…would be peculiar, unfeminine.”  As education reformed to accommodate the changed attitudes about women’s roles, one college boasted, “We are not educating women to be scholars; we are educating them to be wives and mothers.”  Classes changed accordingly. Whereas women once learned chemistry, they now learned skills that would better prepare them to be housewives, such as cooking. The one lesson taught at colleges between 1945 and 1960 Friedan writes, was “not to get interested, seriously interested in anything other than getting married and having children.”  It became widely accepted that women no longer attended college to receive an education, but to obtain an M.R.S. degree and graduate with a husband. 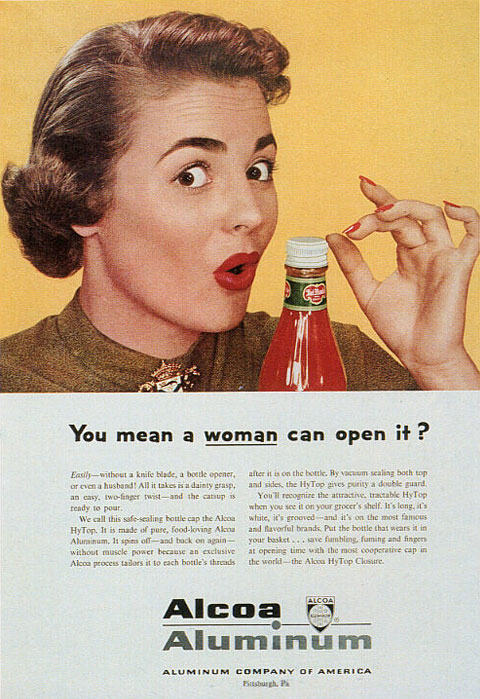 The conflation of motherhood with national security during the Cold War era held mothers responsible for containing communist threat within the home, therefore making them accountable for the shortcomings of individual citizens. A host of problems described by Friedan including “bed wetting, thumb sucking, overeating, refusal to eat, withdrawal, lack of friends, inability to be alone, aggressiveness, timidity, slow reading, too much reading, lack of discipline, rigidity, inhibition,” and exhibitionism were decidedly the result of maternal failure.  Mothers were deemed guilty by Dr. Edward Strecker, consultant to the Surgeon General of the Army and Navy, for the nearly two million men barred for military service due to psychiatric disorders, and hundreds of thousands of others who were discharged or attempted to evade the draft.  Mothers were blamed for the maladjustment of the younger generation, jeopardizing the country’s future.

Friedan writes that indeed, “a subtle and devastating change seems to have taken place in the character of American children,” for which mothers were responsible. “The problem that has no name” swept not only housewives, but their children, manifesting as “frightening passivity, softness, and boredom in American children,” qualities ill-suited for a time of political instability.  Friedan believed maladjusted children were a reflection of maladjusted mothers, ‘”acting out” the mother’s unconscious wishes or conflicts.”  The “feminine mystique,” Friedan wrote, the illusion of the happy housewife, “begins in one generation and continues into the next,” a failure on the part of those who drove women back into the home.

Friedan addressed a problem she witnessed in her own life and accurately depicted many “college-educated, middle-and upper-class, married white women,” but she misrepresented the American woman. In Feminist Theory: From Margain to Center, bell hooks writes of Friedan, “she did not speak of the needs of women without men, without children, without homes. She ignored the existence of all non-white women and poor white women.”  At the time Friedan published The Feminine Mystique, one third of American women were in the workforce. By portaying women “bored with lesire,” hooks continues, Friedan “did not tell readers whether it was more fulfilling to be a maid, a babysitter, a factory worker…or a prostitute.”  While Friedan demands change for the housewife, she does not, hooks writes, “discuss who would be called in to take care of the children and maintain the home if women like herself were freed” from their leisurely lives.  Friedan depicts sexism faced by her own class and race, but she fails to acknowledge that many American women were not fortunate enough to be a housewife or have the means to achieve career goals she sets forth.

Friedan asserted to avoid “the problem that has no name,” women needed eclipse the feminine mystique, refusing to fall prey to its agenda that equated motherhood with career. Saying ‘“no” to the housewife image’ was not a choice between marriage and career, but a choice to refuse conforming to an image created by men to perceive women solely in their biological role.  The only satiable work was that “forbidden by the feminine mystique,” writes Friedan, “the lifelong commitment to an art or science, to politics or profession.”  Breaking free from the feminine mystique meant not only facing the difficulty of obtaining work in male dominated fields, but breaking perceived gender ideals of oneself, one’s husband, and fellow housewives. Contrasting the opinions of others was no easy feat as the feminine mystique, the housewife image, was not simply a career path for women, but a perceived model of patriotic excellence and feminine duty. Yet in her research, Friedan found that only when housewives broke from this mold, did she “enjoy being a woman.”  The “problem that had no name,” she found in the absence of the feminine mystique, ceased to exist.  Friedan’s discovery, seemingly insurmountable at the time, helped inspire second wave feminism and launched the women’s movement in the latter half of the twentieth century.