During the 2012 presidential election, many Republicans argued that, despite his promises in the 2008 campaign, incumbent President Barrack Obama had been unable to improve the economy in the four years of his presidency. Democrats countered that Obama was unable to change anything with the conservative Republican majority in Congress rejecting all of his plans. While these arguments may seem to apply exclusively to current political affairs, similar partisan issues have affected the American government since the drafting of the Constitution in 1787. When the Founding Fathers distributed governmental power into three distinct branches—the executive, the legislative, and the judiciary—they tried to separate the powers evenly to prevent any one branch from gaining too much control. Designed to give each section of the government its own autonomy, the separation of powers has been one of the defining aspects of American democracy. Although the branches were meant to work together in order to maintain the nation’s domestic and international affairs, throughout the years the bipartisan gridlock in Washington has prevented the passage of much legislation.

President Franklin Delano Roosevelt, like President Obama, faced a similar challenge in 1937. The Supreme Court rejected many of Roosevelt’s plans to reform the American economy during the Great Depression; they believed that these programs gave too much power to the federal government. To counteract the power of the judicial branch of the government, President Franklin Delano Roosevelt announced in his Judicial Procedures Reform Bill of 1937 that he intended to pack the Supreme Court with like-minded judges. Many politicians and  average Americans were horrified as the plan threatened to tip the sacred balance of power between the federal branches. Although Congress did not approve the Bill, the Supreme Court Justices took tentative steps to show their compliance with FDR’s radical reforms. In doing so, the court-packing scheme indirectly brought Roosevelt closer to his dream of a liberal court and a stronger centralized government.

Below, Burt Solomon, author of FDR v. The Constitution: The Court-Packing Fight and the Triumph of Democracy discusses President Franklin Roosevelt’s plan to pack the U.S. Supreme Court.

A Historical View of the Judicial Branch

When it was first written, the Constitution did not specify all of the powers the judicial branch would exact nor state how many judges would be appointed to the Supreme Court. Historian Burt Solomon claims that “the men who wrote the US Constitution in 1787 designed the judiciary as the weakest branch of the federal government” and because of this, “locking horns” with the court became a notorious “presidential sport.”

An early battle between the two governmental branches was The Judiciary Act of 1801, which was passed by incumbent president John Adams and the dying Federalist Party. The Act commissioned sixteen new federal judgeships and other judicial offices to politicians with federalist leanings. It is rumored that Adams remained at his desk late into the evening of the last day of his presidency, purportedly commissioning the last of these “midnight judges.”

When he became president, Thomas Jefferson revoked many of Adams’ new commissions. Embittered Republicans accused the Federalists of packing lifetime posts with anti-Jeffersonian politicians in “a brazen attempt…to entrench [themselves] in one of the three powerful branches of the government.” A state’s rights advocate, Jefferson wanted to ensure that no branch of the government, including the judicial, had too much power. More than a century later, Jefferson would be considered the founder of the modern Democratic Party. Ironically, Roosevelt’s actions contrasted starkly with Jeffersonian philosophies for by attempting to pack the court with six judges, FDR’s New Deal policies advocated a strong centralized government.

Prior to the President’s court-packing attempt, the Supreme Court contained nine Justices who followed the economic regime of “laissez-faire” where conserving property rights were considered before the needs of the people.  Named “the Lochner era” after the Supreme Court Case of 1905, during this period the court “protected economic rights, tended to strike down economic regulations of working conditions, wages or hours…” Because they were operating under such a mindset, conservative justices struck down many of Roosevelt’s New Deal acts.

Of the nine judges, the “four horseman”— Justices Pierce Butler, James McReynolds, George Sutherland, and Willis Van Devanter—made up the extreme conservative wing of the Court. These judges, as well as Chief Justice Charles Evans Hughes and Justice Owen Robert, were instrumental in striking down Roosevelt’s more significant New Deal acts, including recovery and relief programs such as the Agricultural Adjustment Act of 1933 (AAA) and the National Recovery Agency (NRA). In May of 1936, the Court took more progressive steps in destroying acts of the New Deals—striking down the Railway Pension Act and the Frazier-Lemke Act— which had increased federal power in Americans’ personal income as well as in the business world. Furthermore, in the case Morehead v. Tipaldo, the Courts overturned the State of New York’s attempt to set minimum wage laws for women workers. Justices of the Courts, with their dogmatic ideology, were focused on protecting American property rights rather than the American people themselves. Roosevelt, on the other hand, felt that the government should have a stronger role in the economy so that federal laws could help citizens during the Great Depression. 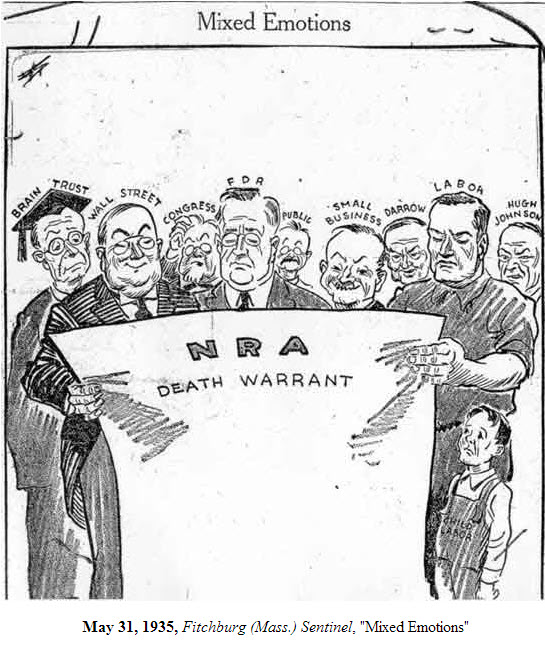 Frustrated by his lack of progress, Roosevelt introduced his Judicial Procedures Reform Bill in1937 soon after his reelection. Because Supreme Court Justices are appointed for life, the Bill would enable the President to place six new members on the Court, one for each Justice over the age of 70 who would not retire. There were many opponents of the Bill; members of Roosevelt’s own party, such as Democratic Senator Burton K Wheeler, opposed the Bill and argued that it would shatter the balance of power between the three branches. ) 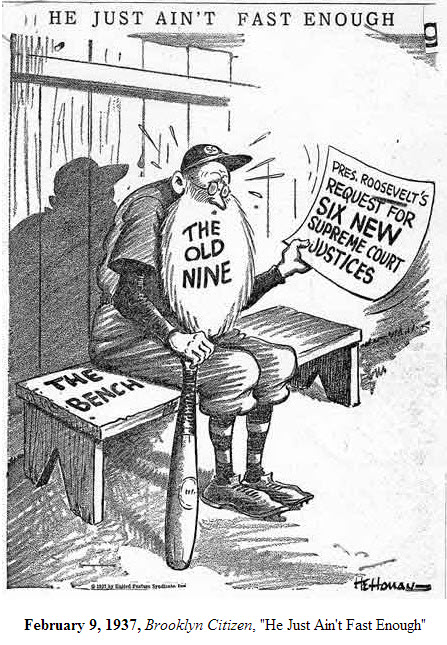 Roosevelt tried to explain his rationale for packing the court in the first Fireside Chat of his second term. Arguing that justices of the Supreme Court must bring a “present day sense of the Constitution,” he stated that this could be accomplished by bringing in “younger men who have had personal experience and contact with modern facts and circumstances under which average men have had to live and work.”


Unconvinced by Roosevelt’s attack on the third branch of the federal government, many citizens turned against President FDR, calling him “King Franklin I” while the phrase “God Bless the Supreme Court” became a fervent prayer among both Republican and Democratic citizens alike. In consequence, Congress, which was composed of many New Dealers of Roosevelt’s own Democratic Party, refused to ratify the Bill and any compromise to it in 1937.

FDR and the Courts Timeline:

ROOSEVELT LOSES THE BATTLE BUT WINS THE WAR

In reference to the court-packing incident, President Roosevelt later stated: “We lost the battle…but we won the war.” The conservative Justices of the court, shaken by the Judicial Reform Bill, began complying with some of Roosevelt’s laws soon after the Bill’s debut. In the West Coast Hotel v. Parrish of 1937, the Supreme Court upheld the legality of Washington State minimum wage legislation for women. This decision contradicted the verdict of the Morehead v. Tipaldo case and prompted the reevaluation of another case, the Adkins v. The Children’s Hospital of 1923, which stated that such legislation was unconstitutional; the ruling on Adkins was consequently overturned. The Supreme Court also began to accept some New Deal laws, such as the Wagner Act and the Agricultural Adjustment Act of 1938, which were echoes of New Deal predecessors—the AAA of 1933 and the NRA—programs previously invalidated by the Court. With the Supreme Court’s impeding victory, Justice Willis Van Devanter, a strict judicial conservative, retired and was replaced by liberal, Hugo Black. Between 1937 and 1941, three more Justices retired and were replaced by Roosevelt’s liberals. Roosevelt eventually received his liberal court and the separation of powers remained intact. 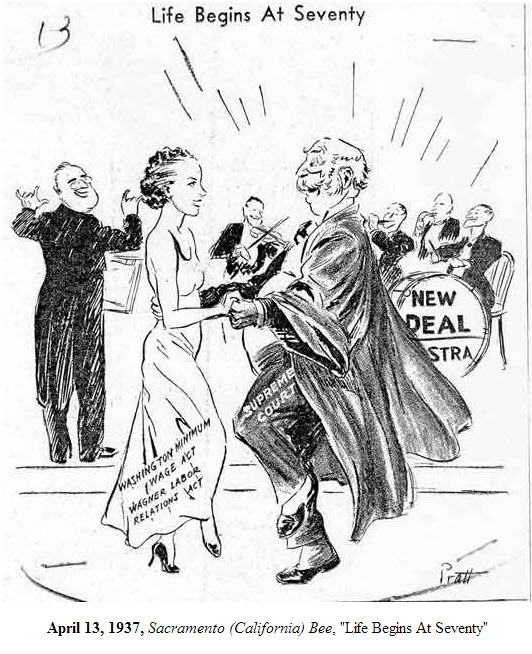