Gentility in the United States

For early Americans, reaching high social status was not a process shaped exclusively by birth. Nor did it have to be a long, gradual process, taking place over generations. Gentility was something that could be achieved through careful study and practice. Most significantly, it was something to be performed.

Precedents for gentility, manners, and etiquette were rooted in the aristocratic social structures of France and England in the eighteenth century, where those at the top of the social ladder sought to conspicuously display their superiority through everyday behavior. Historian Richard Bushman has shown that eighteenth century practices of refining one’s “Body and Mind” were based on European traditions. Gentility bestowed social power through a person’s external appearance and their behavior in both formal and informal settings. Aesthetics of gentility, for example, overtook the process of eating; both the presentation and consumption of food and drink at the dinner table took on new meanings, designed to confirm social hierarchies.

This pattern changed significantly in nineteenth-century America. The increasing popularity of etiquette handbooks, facilitated by technological developments in printing, enabled literate Americans to learn how to become refined and conform to genteel cultural ideals. While American etiquette manuals copied the practical attributes of Old World genteel practices, they stressed that gentility in the United States was a democratizing force.  By marrying traditional behavioral concepts with the American desire for simplicity, handbook authors disseminated cultural ideas that allowed Americans to believe they were forming their own, unique and distinguished culture.

Artificial European social order was replaced in the United States by a natural social hierarchy. Instead of discriminating by birth or wealth, Americans attempted to distinguish people by their ‘function’ in society. By recognizing other men’s necessary role in upholding societal norms, people could, in theory, sympathize with others with a different social status, irrespective of wealth or familial tradition. Within this natural society, uniform and widely understood manners served a useful purpose, illustrating “a quiet, dignified, and manly deportment” aspired to by all men.  This became increasingly common in the early nineteenth century, with the rise of transcendentalism (a 19th school of thought that believed that society ultimately corrupted the purity of the individual). 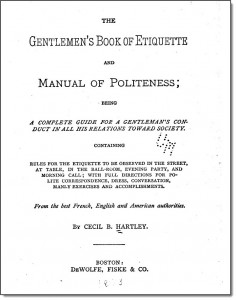 As Ralph Waldo Emerson, the great New England transcendental thinker, noted, “The gentleman is a man of truth, lord of his own actions, and expressing that lordship in his behavior, not in any manner dependent and servile either on persons or opinions or possessions.” New nineteenth century definitions of gentility were closely compatible with transcendental, egalitarian thought. Rather than a means of social distinction, gentility became a cultural equalizer; manners and etiquette – perhaps the two most conspicuous outward measures of gentility – became spontaneous acts of social interaction, available to all men.

First in a series of lectures on the philosophical and cultural principles of transcendentalism.

Dinner Manners: A Case Study of Gentility in Practice

Dinner manners have been in continuous evolution. As recently as the nineteenth century, most people were still eating food from the flat surface of knives. Hygiene was often the basis of many rules of dinner etiquette: “When obliged to cough or sneeze, the napkin should be applied to the face, and the head turned from the table.” Gentility required close control of one’s body; as one manual advised, “To make a noise unnecessarily with the lips in eating may be disagreeable to those sitting near. It is unbecoming to scratch the head or face, or indeed, to put the hand to the head, nor is it graceful to sit leaning with the elbows upon the table.” Despite these similarities, the cultural meaning of manners has diminished significantly in the modern age of TV Dinners.

In the nineteenth century, mealtimes represented the perfect environment for gentlemen and women to practice their genteel way of life. Manners could be performed, understood, and appreciated by a large group of people to appreciate ones manners. As the historian Margaret Visser has shown, the table expressed a common ground that all those present could share.

Rules of etiquette relating to behavior at the dinner table conformed to the wider, more general genteel principles of patience, propriety, and politeness. An 1873 manual on the morality of manners advised, “Under ordinary circumstances, we should manifest no impatience to be served, but should render whatever assistance we can in helping others. Nor should we commence to eat before the company are ready.”  On the same note, another author observed, “It would be impolite to monopolize a conversation which ought to be general. If the company is large, we should converse with our neighbors, raising the voice only enough to make ourselves heard.”

Manners were based on both practicality and gentility, two principles which were far from mutually exclusive. To be sure, certain aspects of American gentility retained some of the often unnecessary grandness of European traditions, but for the most part etiquette guides extolled simple principles that sought to teach people how to serve and interact with each other in everyday situations. Manual authors were making profound comments on American society through unpretentious observations on the most unassuming activities of life. “It is ridiculous,” noted one author, “to make a display of your napkin; to attach it with pins to your bosom, or to pass it through your button hole.”

Link to an 1873 Manual on Morality and Manners

The nineteenth century was a period of great mobility for the American population, as many workers moved from rural areas to the growing cities in search of work. Historians have argued that manners and etiquette were a means of fitting in to a new and alien urban environment. Correct behavior at a social function or the dinner table provided a common ground for a diverse and rapidly changing population.

Etiquette and manners served to entrench widely understood gender norms. Men and women in the early nineteenth century had specific roles within society and the home. They respectively acknowledged the doctrine or ideology of “separate spheres.” Ideologically speaking, the supposed ‘sphere’ women were to inhabit was almost exclusively domestic. Eating dinner – particularly within a formal setting – required gender-specific performances of etiquette, spelled out in manuals directed exclusively to the “ladies of the house.” (Ironically, women were writing many of these manner guides. In order to facilitate the maintenance of separate spheres, a few women were forced to enter the relatively male-dominated fields of authorship and publishing).

An 1857 guide illustrated the variety of roles required by women at all stages of the service and consumption of dinner. Although falling short of the overly-elaborate theatre of European dinner parties, specific actions and mannerisms needed to be adhered to at specific times: “It is quite common for the lady of the house to act as guide, while he [the gentleman of the house] offers his hand to the lady of most distinction. The guests also give their arms to ladies, whom they conduct as far as the table, and to the place which they are to occupy. Take care, if you are not the principal guest, not to offer your hand to the handsomest, for it is a great impoliteness.”

Paradoxically, the provision of gender-specific manners and etiquette acted both as an equalizing and discriminatory force within the American home. On the one hand, it provided a common ground of domestic practice understood by all women, engendering a greater atmosphere of equality among company of different social and financial status. Conversely, it served to entrench discriminatory ideas and practices of discrimination based on gender, whereby women remained married to their specific domestic roles.

Manners and etiquette – cultural practices disseminated in printed manuals – provided easy access to gentility, and served to democratize a style that had been the exclusive property of monarchs and aristocrats in the European tradition. Americans, as the historian Stow Persons has noted, “emancipated gentility from its class confines.”  As one manual succinctly observed, “Politeness is universal toleration.”

Manners were explicit performances of gentility. Just as importantly, however, they were implicit social commentaries on gender, class, race, and American cultural philosophy. Yet, as illustrated by the gender norms, the social advantages denoted by gentility were only available to a select proportion of the American population. Slaves, free blacks, the impoverished and the illiterate perhaps became more isolated by their inability to access and understand the pervasive language of manners and etiquette.