Seventy years ago today on December 7, 1941, the Empire of Japan attacked the United States Navy based in Pearl Harbor, Hawaii. Although Europe was steeped in World War II since September 1939, the United States remained unscathed and only partially involved through their Lend-Lease program. For precautionary measures, between July 1940 and December 1941 the armed forces swelled from 291,000 to 1,655,000 while actively recruiting 131,000 medical personnel. This mass pre-war mobilization was largely concentrated in Oahu, the largest island in the Hawaiian territory (as it was not yet a state in the Union).

On the morning of December 7, the Japanese attacked in two waves. Historians can account for 183 Japanese fighters, bombers, and torpedo planes in the first and 28 submarines and five two-man torpedo subs in the second. The American ships were considered easy targets as they were sitting in rows in the ship yard. 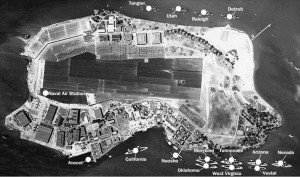 The Japanese attack damaged 339 war planes, 21 American ships, and took the lives of 2,403 people. Although Pearl Harbor was a human tragedy and the magnitude of its impact on everyday civilians could never be calculated, the attack does not represent the largest loss of life in the Pacific Theater of World War II. Iwa Jima, for example, lost 6,000 soldiers to the battle and Okinawa more than 12,000. 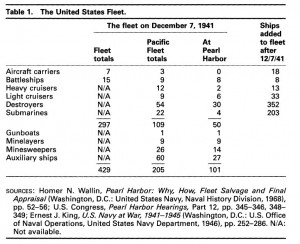 Amazingly only two ‘total losses’ were experienced in terms of battle ships that were not salvageable–the USS Arizona and the Oklahoma which had entered circulation in 1913. They were both sold for scrap metal. The California (1919) and the Nevada (1914) were able to be repaired and return to active use by 1944.

If you are a hardcore World War II fan or educator searching for primary sources related to the attack, the Joint Committee on the Pearl Harbor Attack conducted by the United States Congress is completely digitized and available online.  You can also read the report from the Navy Court on Inquiry and the Army Board.

Yesterday, December 7, 1941 — a date which will live in infamy — the United States of America was suddenly and deliberately attacked by naval and air forces of the Empire of Japan. 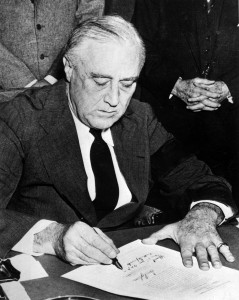 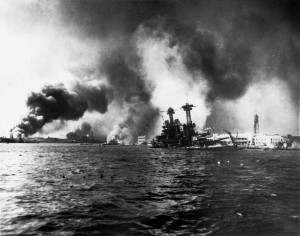 Panorama view of Pearl Harbor, during the Japanese raid on 7 December 1941, with anti-aircraft shell bursts overhead. The photograph looks southwesterly from the hills behind the harbor. Large column of smoke in lower right center is from the burning USS Arizona (BB-39). Smoke somewhat further to the left is from the destroyers Shaw (DD-373), Cassin (DD-372) and Downes (DD-375), in drydocks at the Pearl Harbor Navy Yard. 7 December 1941. Official U.S. Navy photograph.

Pearl Harbor Attack, 7 December 1941. Japanese naval aircraft prepare to take off from an aircraft carrier (reportedly Shokaku) to attack Pearl Harbor during the morning of 7 December 1941. Plane in the foreground is a “Zero” Fighter, in front of “Val” dive bombers. This is probably the launch of the second attack wave.

Sailors stand amid wrecked planes at the Ford Island seaplane base, watching as USS Shaw (DD-373) explodes in the center background, 7 December 1941. USS Nevada (BB-36) is also visible in the middle background, with her bow headed toward the left. Several planes are in the foreground, a consolidated PBY, Vought OS2Us and Curtiss SOCs. The wrecked wing in the foreground is from a PBY. Official U.S. Navy photograph 80-G-19948, now in the collections of the National Archives.

U.S. Navy planes and a hangar burning at the Ford Island Naval Air Station’s seaplane base, during or immediately after the Japanese air raid on Pearl Harbor, Hawaii (USA), on 7 December 1941. The ruined wings of a Consolidated PBY Catalina patrol plane are at left and in the center. Note men with rifles standing in the lower left.