With a variety of leisure opportunities, from vaudeville theaters and nickelodeons to dance halls and amusement parks, New York City was an urban Mecca of possibilities for amusement-seekers in the late nineteenth and early twentieth centuries. The city offered innumerable ways to take one’s mind off the stresses of everyday life. There were also extracurricular offerings that attempted to improve one’s mind. One of the main places where entertainment focused on betterment was the upstate locale of Lake Chautauqua. It was here that a movement born of Protestant tent revivals focused on the educational possibilities of leisure emerged. By 1904, it would find its way beyond this idyllic setting and into much of rural America with the establishment of traveling talent circuits that endured through the Great Depression.

Established in 1874 to train Sunday school teachers in upstate New York, the Chautauqua Movement eventually spread to most of the country, first in the form of independent, autonomous assemblies and eventually as a type of travelling tent show. As it evolved, it became a place where attendees could expect a week of entertainment that would provide moral uplift and avoid the objectionable. A 1908 full-page advertisement in the Holt County Sentinel for the Oregon, Missouri Chautauqua summarizes this mission as follows:

[Chautauqua] is preeminently an institution of learning wherein is taught the science of true religion, the building of character—investing the mind with high ideals, the study and advantage of literary, scientific and artistic attainment, and the promoting and fostering of a social intercourse and culture animating and inspiring the youth with sentiments of virtue, integrity and probity...

Chautauqua was billed as an educational opportunity, foremost a place where the whole family could gather with the rest of the community to obtain culture and build character.

By the early twentieth century, the travelling circuit Chautauqua, having largely replaced the permanent, independent assemblies of the previous decades, became a popular fixture of modern life across small-town America. Though largely associated with the West, they spread all over the country, particularly in towns of under 20,000 people. Any town wishing to host a Chautauqua only had to gain enough community support to ensure that the requisite number of tickets could be sold. With the development of the circuits, which brought their own manpower, tents and other supplies, it was much easier to book an affordable set of talent in places that had never before had the infrastructure to support an assembly. In this way, the edifying mission of Chautauqua was able to reach a much broader audience than it could have in the past.

The circuits, unaffiliated with the mother institution at Lake Chautauqua, offered standardized lineups of programming to a number of towns on a route during a season. As such, they took on a more commercial form than the original permanent Chautauquas had. The ability to broaden the movement’s reach through the circuits inevitably meant that some independence was lost in the face of this “assembly line” service. However, to the majority of people who had never had their own Chautauqua, this potential drawback was worth it.

Common Forms of Entertainment on a Chautauqua Program:

The circuit Chautauqua made standard programming across the country possible, and maintained an emphasis on the rural, small-town setting. Chautauqua was about uplift and education, but perhaps more than anything, it was a reaction against urban life. Considering the country’s trajectory at the time, this tension is certainly understandable. The peak of the movement coincided with the first time that more people lived in cities than rural areas, as revealed by the 1920 census.

The lectures and entertainments presented were meant to build up communities and the traditional values that they held in the face of a nation becoming more connected and diverse through urbanization. It was upholding Victorian morals rather than promoting a true intellectual renaissance that seemed to be the impetus driving community leaders—from members of women’s clubs to local business owners—to support a local Chautauqua. In the face of these gradually eroding ideals, they desired to keep families where they were and influence young people to avoid the lure of the big cities by offering a vision of the “good life,” characterized as “small town, Protestant, agricultural, and patriotic; in short, mainstream Midwestern America.” 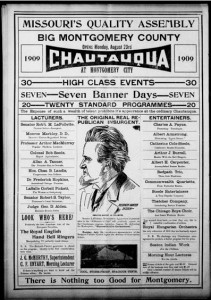 Considering this, it is unsurprising that proponents often portrayed Chautauqua as a movement of essential value to the American populace. As one contemporary article pointed out, some believed “…Chautauqua is the fourth greatest American institution, standing with that glorious trinity—the Home, the Church and the School…” By the time that the Chautauqua circuits emerged, many people saw it as capable of bringing high quality and high-class entertainment to people all over the country—even in the smallest of towns—as long as residents wanted it. Chautauqua’s popularity suggests that a high value was placed on the movement in its prime. For instance, during its peak season of 1924 as many as 40 million people attended a Chautauqua in one town or another.

However, not everyone viewed Chautauqua as the progressive and valuable place as it presented itself. Especially in its twentieth century travelling incarnation, these critics saw it as little more than a commercial enterprise pandering to “infantile minds.” One such critic was author Sinclair Lewis, whose novel, Main Street, presented a harsh critique of the small-town life embraced by Chautauqua, while also looking specifically at the movement itself. In this novel, the protagonist, Carol, moves from the big city to a rural town with her husband, where she feels discouraged by what she perceives as backwardness. As a result, she decides to work for reform. Regarding Chautauqua, the author wrote:

Living in Minneapolis, Carol had never encountered the ambulant Chautauqua, and the announcement of its coming to Gopher Prairie gave her hope that others might be doing the vague things which she had attempted. She pictured a condensed university course brought to the people…But she was disappointed when she saw the program. It did not seem to be a tabloid university; it did not seem to be any kind of a university; it seemed to be a combination of vaudeville performance, Y.M.C.A. lecture, and the graduation exercises of an elocution class…

Lewis portrayed Chautauqua and the small town audiences who attended what he describes as little more than a tent show as unintellectual. He saw the movement as foregoing any challenge to the norm and causing no stimulation that might lead to progressive thought. As he states in the voice of his fictional audience, “‘…New ideas are first-rate, but not all this criticism. Enough trouble in life without looking for it!’ Thus the Chautauqua, as Carol saw it. After it, the town felt proud and educated.”

This critique by Lewis was a particularly scathing indictment on a new American institution, as well as an entire way of life. Though Main Street was a bestseller, it was not roundly accepted as a masterpiece, particularly by those in Lewis’s crosshair. In fact, at least one lecturer on the Chautauqua circuit responded to his criticism. Alex Miller presented a lecture advertised as “an answer to Sinclair Lewis’ arraignment of the small town.” ) Identified as a newspaper editor and postman (in addition to his Chautauqua duties), Miller was presented as the perfect representative of the America that was the subject of critique; as such, he was deemed credible enough to present an authentic image that an outsider like Lewis could not. Main Street and other similar intellectual criticisms of circuit Chautauqua’s perceived flaws cut at the heart of a movement concerned with keeping small town values and community alive, but the stakeholders were willing to fight for their image and ideals; ironically, the venue in question served as the perfect place to wage this defense.

Contemporary literature like Sinclair Lewis’s Main Street provides one way to learn about movements such as circuit Chautauqua and the society that embraced (or rejected) them. However, tangible ephemera—ranging from brochures to photos and recordings—were also left behind and provide useful tools for understanding the mindset of figures like the aforementioned lecturer Alex Miller. In the case of circuit Chautauqua, the University of Iowa, in conjunction with the Library of Congress’s American Memory Project, have created a digital collection called Travelling Culture: Circuit Chautauqua in the Twentieth Century that provides thousands of relevant resources freely accessible the Web. 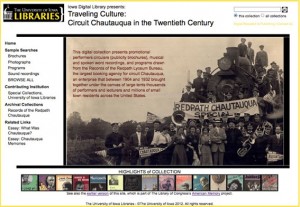 With so many materials made available through this digital resource, finding what you need might seem a daunting task. However, with a few tips, you will be able to easily navigate through this and other collections. The Travelling Culture collection consists of print ephemera, photographs, and sound recordings from the days of circuit Chautauqua, specifically focusing on one of the biggest agencies that booked Chautauqua programs, the Redpath Lyceum Bureau.

If you are interested in a holistic view of what went on during a Chautauqua assembly, check out a search for “programs” (conveniently linked on the main page of the collection hosted by the University of Iowa). These digitized programs will show you the full range of what kind of talent would be seen at a small town Chautauqua during the early twentieth century and what kind of local support was necessary to put on such an event.

We can learn more about what small town life was like through Chautauqua movement images. Take note of things such as the demographics of the audiences and the breakdowns of race, age, and gender. What are these individuals wearing and what is their overall disposition during such an occasion? Images also provide us with a chance to learn even more about the entertainers on the circuit and the process of getting an assembly ready.

To explore additional photographs in the archive, check out this link.

Brochures show us how the various entertainers and lecturers on the Chautauqua circuit were marketed, from what their shows were about to how they wanted to present themselves. They give us an idea of the tenor of the Chautauqua platform by showing us what ideas and viewpoints were popular and therefore probably most acceptable to these audiences.

For instance, looking at a brochure such as this one for Mason’s Jubilee Singers in 1909, we can start to formulate ideas about the place and perception of African Americans in Chautauqua. Blacks appear to be presented in stereotypical slavery-era plantation roles as we read quotes:

This Company makes a specialty of old plantation melodies, camp meeting shouts and river and log cabin ditties of Negro folk lore of a century ago…

…The rollicking humor of the Great Negro Master combined with the delightful manner in which negro rhythm is depicted by Mason’s Jubilees in the Lyceum, the Chautauquas and entertaining fields in general, attest their skill as entertainers beyond reproach and comparison.

By doing further searches on “African Americans,” one of the subjects associated with this document, we can find out if other artifacts that came out of circuit Chautauqua support this idea.

For more brochures portraying African Americans, go here. For additional brochures of all types, check out this link.