At the close of the film, after the triumph of the Ku Klux Klan, and the final intertitle rolled across screen, all eyes at the White House private screening were on President Woodrow Wilson. How would the President respond to the groundbreaking new film Birth of a Nation, directed by D.W. Griffith and based off Thomas Dixon Jr.’s 1905 novel, The Clansman? On March 21, 1915, Wilson applauded Birth, proclaiming the film was “writing history with lightning.”  The President’s reaction was not surprising; Birth gained wide popularity across the nation in the early twentieth century, and played a crucial role in constructing a narrative of the Civil War that excused Southern white violence and reinforced white supremacy. Yet, at a time when Jim Crow was the law of the land, black Americans across the nation protested the film with a publicity protest lead by the newly formed NAACP. They decried its blatant racism and inaccurate depictions of the Civil War era. The black and white, three-hour silent film followed the stories of two white families in the Civil War and Reconstruction, the pro-Union Northern Stonemans and the pro-Confederacy Southern Camerons. It depicted members of the Ku Klux Klan as heroes, and former black slaves as foolish or even villainous. Today, when historical memory is the source of ever more interest and focus, from the popularity of documentaries and the History Channel, to Steven Spielberg’s Lincoln, Birth of a Nation begs reexamination. How do we depict our history through media, especially film, and what does this say about us? What story do we choose to tell?

Birth of a Nation argued that white Americans from the North and South, represented by the two main families in the film, could mend their wounds and reunite through the shared recognition of the inferiority of blacks. This story of the Civil War and Reconstruction built on memories and narratives that glorified the Old South and promoted white sectional reconciliation. In his book Race and Reunion: The Civil War in American Memory, David Blight argues that during the second half of the nineteenth century, the Reconciliationist and White Supremacist stories of the Civil War triumphed. These narratives offered a reunion for the country based on the redemption of white Southern men, and the re-subjugation of former slaves.  Birth reinforces these ideas, portraying a war that tragically split Northerners from their Southern brothers, and assaulted the South’s families, values, and way of life. The two youngest sons of each family, Tod and Duke, suffer fatal wounds and die in each other’s arms on the battlefield, representing the tragedy in white lives lost. According to the film, the war resulted in a misguided promotion of blacks to levels of authority, and ensuing horrors for the white families of the South. In Griffith’s version of Reconstruction, all blacks who weren’t “faithful” teamed up with carpetbaggers from the North to loot, pillage, and degrade the South. Redemption, however, was finally achieved, as Southern whites removed blacks from office and authority, and reclaimed their honor and land, and reuniting with northern whites, symbolized through the interfamilial romances of Phil and Margaret, and Ben and Elsie.

In one scene early in the film, Phil Stoneman, visiting the Cameron family at their plantation, walks through the cotton fields with Margaret and Ben Cameron. The cotton fields are beautiful, and Phil, Margaret, and Ben play and chatter happily. In the background, slaves work contentedly, with no harsh overseer or exhausted toiling child in sight. As the three play, Ben takes Phil’s daguerrotype of his sister, Elsie Stoneman. When Ben sees the image of Elsie, he immediately falls in love with her. The romantic imagery of the lush, happy plantation, where love blossoms, idealizes the slave system as benign. This scene, like the rest of the movie, places the story, emotions, and characters of the white Southern and Northern Americancenter stage, reconciling the black characters to the margins of the story. As the three leave, the slaves look up to happily and childishly wave good-bye to their masters.

The freed blacks, on the other hand, committed misdeeds throughout. In a scene about Reconstruction, freed blacks lead as politicians in the South, with their shoes off on desks, drinking alcohol, and creating chaos. This suggests freed blacks were given positions they didn’t deserve and weren’t capable of performing beliefs about the deep and natural inequality between white and black. Even worse than their stupidity, black men, like the soldier Gus and politician Silas Lynch, threatened the white women of the South and North with their sexual appetites. The In one scene, Gus, a newly promoted black officer, chased white, innocent Flora, who chose death over submitting to him. The intertitle proclaimed, “For her who had learned the stern lesson of honor we should not grieve that she found sweeter the opal gates of death.” Threats of sexual amalgamation held continuing resonance for white audiences in the early twentieth century, who still largely feared black sexuality. These fears underlay the contemporary lynchings of black men, who were often killed on trumped-up rape charges, and were a justification for the violence that underlay Jim Crow. In another early scene, Lydia, the mulatto mistress of Austin Stonemen the northern abolitionist politician, appeared to lure the senator into sexual relations. This depiction is cruel and absurd, given the sexual abuses of black women by white men. This kind of violent sexual conduct is not referenced in the movie, perhaps because the sexual abuse of black women did not threaten or undermine white power the way that the reverse did.

By the early 1900s, every southern and border state had effectively disenfranchised most of its African American citizens through tactics such as poll taxes, literacy tests, “white” primaries, and constitutional amendments. This had highly undemocratic results, as African Americans were considered full citizens for representation purposes but were denied the vote. In 1896, the Supreme Court upheld “separate but equal” in Plessy v Ferguson, embedding white supremacist beliefs in the institutions and structure of society and legitimizing Jim Crow segregation.

After Reconstruction and later disfranchisement, the country began to renarrate its history, redeeming and romanticizing the pre-war South. While Harriet Beecher Stowe, author of Uncle Tom’s Cabin, and abolitionists mostly argued paternally that black slaves were childlike beings who needed the help and guidance of educated white Christians, Dixon and Griffith felt that black Americans presented real dangers to society. Yet both – implicitly or explicitly – agreed on the inferiority of blacks. Beneath much of the outcry over black societal ascendancy and racial mixing was the fear of the erosion of white men’s superiority. Dixon, as a working-class man, was especially horrified that he would have to give up ground to the descendants of former slaves.  Birth of a Nation reflected attempts by Americans to justify the horrible violence of slavery, and tell a story that excused their own guilt. 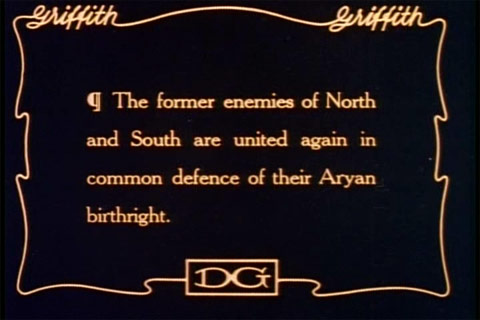 Although the movie, with its epic battle scenes and fast-paced drama, enjoyed immense popularity, it was also the subject of protest. Led by the newly-formed National Association for the Advancement of Colored People (founded in 1909), campaigns to prohibit the movie raged in cities from New York and Los Angeles to Chicago and Boston. Chicago, Minneapolis, St. Louis, and Denver were the only major cities to ban the movie.


When Birth was released in Boston, the NAACP took charge of the legal aspects of the fight, while NERL, the National Independent Equal Rights League of Boston, led the campaign to mobilize the local black community and amass grassroots support. The president of the league was William Monroe Trotter, a black Bostonian who came from a prosperous and politically active family and who founded Boston’s only black newspaper the Guardian in 1901. Trotter allied with other black leaders, such as the spiritual leader Reverend Montrose W. Thornton of the Charles Street A.M.E. Church, and women leaders such as Dr. Alice Woodby McKane. The NAACP met with James Michael Curley, Boston’s mayor, and appealed to him to ban the film. Curley refused, but agreed to edit out some of the particularly offensive scenes. Unsatisfied, Boston’s black community staged a protest outside of Tremont theater on April 17.  Police met the five hundred African American protestors, but some were able to sneak in to the theater and toss eggs at the screen. Outside, black Bostonians gave speeches and chanted in protest. After another protest at the State House, Boston’s governor David Walsh released a statement recognizing the black community’s “deep-rooted” anger, but urging them not to “take to the streets again in direct-action protest.”  Blacks continued to protest the film, packing the courtroom as Judge Thomas Dowd deliberated over whether to ban it. On April 22, the judge announced his decision that one of the scenes would be deleted, but otherwise the movie could play. Despite continued protests by the black community, the censorship board approved the movie and after June 7 there were no further protests.

The black community recognized the importance of establishing an emancipation narrative and contesting their own societal inequality. They recognized that images of blacks as unfit for freedom were dangerous for their efforts to attain rights and citizenship. Polgar argues that the protests were an early example of the use of direct action tactics that would become so crucial decades later. Melvyn Stokes also argues that the setbacks the movement faced convinced some of the futility of seeking change only through the system, and convinced them to embrace more radical direct action tactics.  The Birth of a Nation, while an offensive film to many, provided an opportunity for black Americans to demand respect.

Other historians argue that the black protest movement against the film was not so effective. Arthur Lennig argues that the protests wasted black time and energy, and that most people in 1900s America did not see the movie as racist at all.  Instead, the attempts by the black community to ban the movie created public interest and helped publicize it. Most contemporary white Americans were not offended by Birth. Indeed many Washington elites, including the Chief Justice and members of the Supreme Court, expressed no anger or offense after seeing the movie. Moreover, although some disapproved of the film, Birth was generally praised as an accurate depiction of the nation’s past.

Birth was not the only film offering a Civil War narrative. Oscar Micheaux responded to Birth with his film Within Our Gates (1920), an anti-lynching film exposing the underlying hypocrisy and racism of Birth of a Nation. Through his film, Micheaux attempted to correct the racist assumptions of Birth. He created intelligent, capable black characters, hoping to convince the American public of the respectableness of middle-class black families, advocate black education, and highlight the valuable presence of black people in the nation.  However, Micheaux’s film was, and remains, far less popular than Birth.

Birth of a Nation demonstrates how many early twentieth-century Americans wanted to view the Civil War and romanticize the South, and how assumptions about racial inferiority helped (at least in theory) unite disparate elements of the white American people. Birth bolstered a narrative that forgives slavery and depicts white southerners as victims, one that would reemerge in countless iterations idealizing plantation life, such as Gone with the Wind. It reveals the philosophy that upheld and excused Jim Crow violence and inequality. The immense protests, in turn, speak to the level of black activism in the early 1900s. Birth etched this history of the Civil War and Reconstruction into the nation’s consciousness, a history that continues to color racial beliefs today.