On October 16, 1859, abolitionist John Brown led an interracial group of men on a raid on the armory at Harpers Ferry, Virginia. Brown hoped to arm slaves and instigate a slave rebellion. The mission failed, and Brown became a villain in the South, but his trial and execution for treason made him a martyr in the North and inspired one of the United States’ most enduring national hymns. Long after Brown was gone, the melody continued to serve the mission.

Brown’s commitment to abolishing slavery was longstanding. Following the Kansas-Nebraska Act of 1854, which stated that Kansas’s admission to the Union as a free or slave state would be decided by popular sovereignty, Brown and his family joined the flood of Americans who moved to Kansas, hoping to tip the scales. A series of armed conflicts between pro- and anti-slavery migrants ensued, with so much bloodshed that the years-long episode was dubbed “Bleeding Kansas.” In 1856 Brown participated in one particularly violent incident, known as the Pottawatomie Massacre. In retaliation against a pro-slavery attack, Brown led an anti-slavery group in killing five pro-slavery men by hacking them to death. Brown – like most assailants in Bleeding Kansas – evaded capture. In total, 200 people died over the slavery question in Kansas in the first half of 1856 alone.

Brown’s reemergence at Harpers Ferry three years later was even more audacious – and consequential for the nation. Fourteen of Brown’s eighteen followers were killed, including two of his sons, and Brown himself was captured and tried for murder, conspiracy, and treason. A jury found him guilty and he was hanged on December 2, 1859. The failed raid and Brown’s execution divided the country. Many northerners – including most politicians and the press – condemned Brown’s violent methods, but some northern abolitionists held parades in Brown’s honor. Meanwhile, southern whites grew more fearful of a conspiratorial slave revolt supported by northern whites.

The most profound historical consequence of the Harpers Ferry raid was its contribution to the coming of the Civil War (1861-65), as the divide between North and South seemed increasingly unbridgeable. In addition, Brown became an iconic figure in the North, where he represented not only the abolition movement but also heroic martyrdom. Brown lived on as an important cultural symbol as the Union asked men and their families to, like Brown, make the ultimate sacrifice. At first, this sacrifice was for the Union, but after the Emancipation Proclamation on January 1, 1863, more Union soldiers understood their sacrifice in terms of ending slavery. It is little wonder that a song with lyrics that hailed John Brown, the Republic, and the moral rightness of the cause became the Union’s Civil War anthem.

Before the Civil War, a song circulated around religious meetings with the lyrics, “Say, brothers, will you meet us? On Canaan’s happy shore?” The song was alternately called “Say, brothers, will you meet us?” or “Glory, Hallelujah.” It was popular near Charleston, South Carolina – in free Black churches and on army posts. Once the Civil War began, the catchy tune – which made for an ideal marching song – found more pungent lyrics, such as “John Brown’s body lies a-mouldering in the grave. His soul is marching on!” and “They will hang Jeff Davis from a sour apple tree.” The earliest reporting of the new version described Union troops singing it as they marched through Boston on July 18, 1861. The revamped song, titled “John Brown Song” or “John Brown’s Body,” quickly spread through Union Army camps.

The song spread throughout the country. Charlotte Forten, an African American writer and teacher, taught the song to black schoolchildren in South Carolina, and black regiments sang “John Brown’s Body” as they took the city of Charleston.

From the beginning, the lyrics proved malleable as Union soldiers added verses. The next distinct version of the song, however, came not from army camps, but from writer, abolitionist, and future woman’s suffrage advocate Julia Ward Howe. While visiting Washington, DC, she heard Union troops singing “John Brown’s Body.” Howe penned new lyrics, which she published in the Altantic Monthly in February 1862. Her version retained the moral sensibilities of “John Brown’s Body” and the morale-boosting tune, but her lyrics were more poetic and infused with religious imagery. Howe’s version, the “Battle Hymn of the Republic,” became a lasting testament to the swirl of patriotic, religious, and moral convictions of Union supporters.

Howe’s lyrics built on the metaphorical “promised land” of Canaan in the original version, and the confident “marching on” of “John Brown’s” lyrics. She added more religious imagery – “Mine eyes have seen the glory of the coming of the Lord,” and “He has sounded forth the trumpet that shall never call retreat” – but retained “John Brown’s” topical Civil War references. With lyrics about “the watch-fires of a hundred circling camps” and the call to arms, “As he died to make men Holy let us die to make men free” – the Civil War context is at the forefront.

This 1917 version is among the oldest recordings of the “Battle Hymn of the Republic.”

Beyond the Civil War Era

Despite the specifics of Howe’s lyrics, the “Battle Hymn” outlived the Civil War era. In the twentieth and twenty-first centuries, Americans returned to the “Battle Hymn” in times of war and strife – and in the midst of campaigns for equality. Dr. Martin Luther King’s last public speech ended with Howe’s famous words, “Mine eyes have seen the glory of the coming of the Lord!”

While the song retained its connections to John Brown, the Civil War, and the end of slavery, it also transcended its original context, becoming a national anthem that Americans turned to in times of mourning. Two months after King’s assassination, Robert F. Kennedy’s slain body passed through Philadelphia, where nearly 20,000 people – many of them African American – began to sing the “Battle Hymn.” (ABC News footage of mourners singing can be viewed here, 4:26-4:53.) The song was also performed at Washington National Cathedral following the attacks of September 11, 2001.

The “Battle Hymn of the Republic” remains an enduring patriotic hymn. The United States Field Army Band performed this version in 2016: 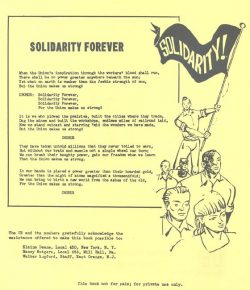 Although the “Battle Hymn of the Republic” – with Julia Ward Howe’s lyrics – remains in currency today, the song has also lived on in other versions. Perhaps most famous of the post-Civil War versions is “Solidarity Forever,” written in 1915 by Ralph Chaplin, a leader of the Industrial Workers of the World union.

Amidst poverty and the persecution of striking workers, Chaplin saw a connection between nineteenth-century abolitionists and twentieth-century labor organizers – especially when a Socialist strike leader named John Brown was arrested on false charges. Chaplin’s lyrics reframe the song around the causes of unionism and workers’ rights – and replace the religious chorus with one that celebrates worker solidarity. Over the past century, the song has become an anthem for unions around the world.

Pete Seeger and the Almanacs – strong supporters of the labor movement – perform “Solidarity Forever” in this 1955 recording.

In the mid-1960s African American singer-songwriter and civil rights activist Len Chandler updated the lyrics once again to reflect the challenges faced by the civil rights movement. Chandler’s “Move On Over, Or We’ll Move On Over You” includes biting lyrics that lambast jails “filled with black men” and courts “white with hate,” but also criticize Americans who counseled patience and gradualism with verses like this one:

You conspire to keep us silent in the field and in the slum
You promise us the vote and sing us ‘We Shall Overcome’
Hey, but John Brown knew what freedom was and he died to win us some
The movement’s movin’ on.

Chandler also wrote a new chorus; like “Solidarity Forever,” “Move On Over’s” chorus was memorable and full of conviction:

Chandler wrote the song for a march in commemoration of Harpers Ferry. He explained, “a bunch of the New York politicos were going to do a march… and Harpers Ferry was where John Brown had made a raid and struggled to erase slavery… and that’s when I wrote ‘Move On Over Or We’ll Move On Over You.”

Chandler’s lyrics clearly reflect his historical understanding of Brown’s significance, with the line “Hey, but John Brown knew what freedom was, and he died to win us some.” Chandler also pays tribute to Julia Ward Howe’s version, with the opening line, “Mine eyes have seen injustice in each city, town and state,” echoing Howe’s “Mine eyes have seen the glory of the coming of the Lord.”

The following decade, an activist again remade the song – this time adapting it to the women’s movement. In 1970, Meredith Tax revised the lyrics to reflect the challenges faced by women. She kept Len Chandler’s chorus, but changed “For the movement’s movin’ on” to “For women’s time has come!” Tax also nodded to Julia Ward Howe, opening the song with the lyrics “Mine eyes have seen the glory of the flame of women’s rage,” and titling the new version “The Battle Hymn of Women.” The verses addressed such concerns as prescribed gender roles, the burdens of domestic labor, and unequal pay. The second verse states,

You have told us to speak softly, to be gentle and to smile
Expected us to change ourselves with every passing style.
Said the only work for women was to clean and sweep and file
That’s why we’re marching on!

Two years later, feminist activists at the 1972 Democratic Convention sang “The Battle Hymn of Women.” At this historic convention, the recently-formed National Women’s Political Caucus – dedicated to “increasing women’s participation in all areas of political and public life” – nominated African American congresswoman Shirley Chisholm for president. This apparently spontaneous performance of “The Battle Hymn of Women” symbolically linked women’s political representation to past struggles while also affirming – through Tax’s lyrics – the unique challenges faced by women. The activists’ rendition made it into Sandra Houch’s documentary, The Year of the Woman (1973). This clip from the film shows Steinem and other activists singing Tax’s version.

For over 150 years, Americans have invoked “John Brown’s Body” and the “Battle Hymn of the Republic” to bolster their cause. Howe’s lyrics – infused with poetry and religious imagery – and the song’s sing-able, march-like melody have contributed to the song’s lasting appeal. But it is the story behind the song – John Brown’s vision of abolition and Howe’s conviction in the moral rightness of the Union cause – that give the “Battle Hymn” its enduring resonance.

“John Brown’s Body” and Other Versions

Baseball and the Civil War