Although not featured prominently in history books, American land and agricultural policy laid the groundwork for the country’s geographic, political, and economic development. It defined settlement patterns, characterized America’s role in the global market, and navigated the country in and out of economic turmoil. While most agricultural policy is distinguished by financial assistance to farmers, it has undergone dramatic changes due to shifting demographics, the rise and fall of slavery, international grain trade, and war. Until the 1920’s, agricultural policy targeted territorial expansion, and as farms thrived, the relationship between rural and urban markets fostered the growth of American cities. Later, as technological innovations increased crop yields and international demand declined, policy curtailed production to regulate supply and demand. Today, expansion-based policy characteristic of the eighteenth and nineteenth centuries has returned. Understanding why and how agricultural policy has changed over time contextualizes the shift from farming communities to factory farms, environmental crises, America’s role in international grain trade, and how food travels from farm to table.

Eighteenth- and Nineteenth-Century Territorial Expansion and the Agricultural Boom

American land policy began in the wake of the Revolutionary War, designed to bolster agricultural production to support the expanding nation. The Land Ordinance of 1785 required states and Native Americans to cede land west of the Appalachian Mountains to Congress, who parceled it “into townships of six miles square,” and “proceed to sell the townships, or fractional parts of townships at public venue.”  The act settled farmland, but high land prices prohibited many from venturing west. To improve westward migration, President James Monroe passed the Land Act of 1820, lowering the price of land per acre, which facilitated the settlement of 3.5 million acres.  President Abraham Lincoln promoted expansion when he passed the Homestead Act in 1862. The act granted settlers one hundred and sixty acres of land, which they would own outright on the condition of improvement after five years of homesteading, or could purchase at a low cost after six months.  By the end of the nineteenth century, agricultural policy contributed to the settlement of 80 million acres of farmland. 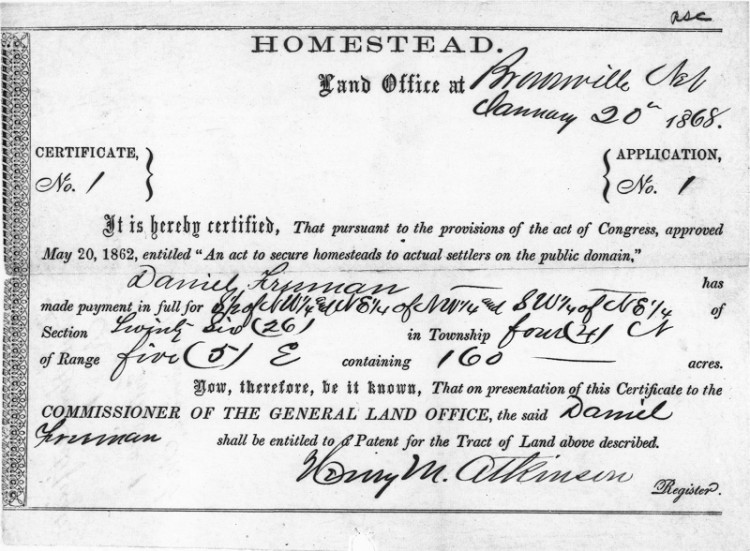 Land policy that targeted territorial expansion built an American agriculture empire, but at the expense of Native American populations. Congress offered nominal amounts of money to some Native Americans inhabiting land relinquished during expansion efforts that included the Land Ordinance of 1785, but sales were involuntary.  In 1832, under Chief Justice John Marshall, the Supreme Court promoted tribal sovereignty, which recognized Native American tribes as “domestic dependent nations.” The court asserted in Worcester v. Georgia, “Indian Nations had always been considered as distinct, independent political communities, retaining their original and natural rights, as the undisputed possessors of the soil.”  The Marshall Court’s opinions were overlooked in nearly all forms of territorial expansion (most notably by the Jackson Administration’s Trail of Tears), including future land policy such as Lincoln’s Homestead Act of 1862 that continued to promote the growth of agriculture.


Agriculture expanded early American cities and fostered a booming urban population. The success of expansion-based policy became increasingly evident in the early twentieth century as American agriculture supported global markets and wartime needs. Exports sustained high grain prices, leading the United States Department of Agriculture to describe the years between 1910 and 1914 as the “golden age’” of farming. Due to government assistance, American farmers experienced continued success during and immediately following World War I. To ensure bountiful food for the home front and the devastated allied nations, the government implemented price supports on crops.  As prices of agricultural commodities soared, farmers maximized production to increase their profits. The artificial prices implemented by the government masked the problems of overproduction that threatened food prices and the agricultural system as a whole.

The Great Depression Arrives Early to the Farm

Following World War I, the government revoked wartime price supports and the European market simultaneously recovered, causing agricultural exports to decline by 20% and grain prices to plummet.  Despite a surplus of agricultural commodities, farmers increased production to compensate for low prices, worsening the imbalance of supply and demand and further devaluing their crops. As their desperation grew, farmers failed to practice sustainable farming methods, which exasperated the Dust Bowl. Overplowing land and failing to let it lay fallow resulted in exposed topsoil, which combined with drought caused severe dust storms – resulting in one of the worst man-made ecological disasters in American history.  Subsequent government policy implemented to save farms failed because it provided only short-term solutions. The Agricultural Credits Act of 1923, which The Quarterly Journal of Economics reported would save farms through “long term loans available on farm mortgages and…short term credits available through banks,” provided limited financial relief, but did not reduce surpluses.  The Agricultural Marketing Act of 1929, like the Agricultural Credits Act of 1923, sought to resolve low prices through the distribution of loans, but similarly failed to regulate supply and demand.  Three years later, as grain prices dropped to an all-time low, the Federal Farm Board declared, “its efforts to stem the disastrous decline of farm prices had failed,” and called for legislation to “provide an effective system for regulating acreage or quantities sold, or both,” ending the American tradition of agricultural expansion. 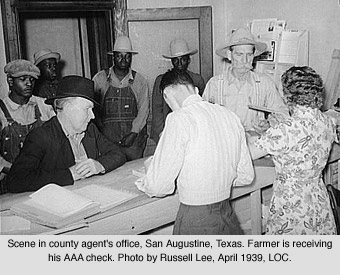 In 1932, at the Federal Farm Board’s urging, President Franklin Delano Roosevelt adopted a new approach to agricultural policy designed to restore crop prices by regulating supply and demand. Under the 1933 Agricultural Adjustment Act, Roosevelt passed the inaugural farm bill, which subsidized farmers to limit their production. Many were dismayed the government paid farmers not to plant and even destroy crops while much of the country struggled to purchase food and waited in line at soup kitchens. But by regulating supply and demand, reduction efforts restored the prices of agricultural commodities to those of the early twentieth century.


The long-term importance of price controls in farm policy became evident when the Agricultural Adjustment Act of 1933 was temporarily revoked when the 1936 Supreme Court decision United States v. Butler ruled the act unconstitutional.  The average income of farmers, which doubled following the first farm bill, fell to late 1920’s levels, and farmers returned to practices of overproduction to make ends meet.  The threat of another depression hastened the reinstatement of crop regulation through the Agricultural Adjustment Act of 1938, which restored financial security to farmers. Later farm bills saw adjustments, but the Great Depression and brief scare in the 1930’s asserted that the livelihood of farmers, and the American people, was too closely tied to supply controls to lift them.

Nixon’s War on Hunger and the 1973 Farm Bill

After forty years of regulating production to balance demand, domestic and international circumstances compelled President Richard Nixon to rethink agricultural policy. Between 1971 and 1972, crop failure in the Soviet Union lead the country to purchase nearly 25% of America’s wheat.  Dubbed the “Great Grain Robbery,” food prices in America soared.  In response to the unanticipated prices, Nixon declared a war on hunger, and promised the American people, “I not only accept the responsibility for ending hunger and malnutrition, I claim the responsibility.”


Nixon’s response culminated in the Agriculture and Consumer Protection Act of 1973, which Secretary of Agriculture Earl Butz called “an historic turning point in the philosophy of farm programs in the United States.”  Better known as the 1973 farm bill, the act ceased to pay farmers to plant their land in accordance to supply and demand, and began subsidizing crops by the bushel to reward production. Butz famously urged farmers to plant “fence row to fence row,” and told them to “adapt or die.”  The farm bill succeeded in lowering food prices as intended, but it reinstated a new era of imbalanced supply and demand.

Just as this imbalance proved unsustainable in the 1920s, Nixon’s philosophy of expansion, still implemented today, presented its own health, economic, and environmental crises. After the 1973 farm bill, Americans spent a lower percentage of their income on food than ever before, purchasing more calories for less money, a trend that adversely impacted the nation’s diet. Subsidized foods became less expensive, yet were higher in energy than unsubsidized crops such as fruits and vegetables, so Americans were financially inclined to purchase them. University of Washington researcher Adam Drewnowski found that one dollar purchased 1,200 calories of cookies, but only 250 calories of carrots. Since subsidized crops are less expensive, and therefore more sought after, farmers who grew subsidized crops saw the most success, while those who did not fell behind. Despite helping to eradicate acute hunger and malnutrition, the bill devastated small farmers and contributed to decreasing the number of farms in America by 63%, effectively changing rural landscapes and economies. The rise of factory farms that grew specialized crops subsidized by the government presented environmental troubles as well. Increased production contributed to deforestation, higher emissions of greenhouse gases, and a greater need for fertilizer and pesticides that contaminated water sources and accumulated in the food chain. As intended, Nixon’s agricultural policy lowered food prices, but the imbalance of supply and demand manifested in long-term problems.

Agricultural policy has supported America’s greatest triumphs. Expansion efforts in the eighteenth and nineteenth centuries resulted in western migration that led to agricultural prosperity in rural areas. The establishment of farmland allowed for urban economies to flourish and more people to live in cities, and provided both food and work for America’s rapidly expanding population. The abundancy associated with land expansion policies remained intrinsic to the nation’s success through World War I, as America provided for the home front and the allied nations. President Franklin Delano Roosevelt’s passing of the 1933 Agricultural Adjustment enacted an unprecedented and highly successful approach to agricultural policy that defined farming for four decades. While controversial, President Richard Nixon’s 1973 farm bill lessened acute hunger and malnutrition.

Left unregulated, agricultural policy has proved to be as catastrophic as well as instrumental culturally, economically, and environmentally. Eighteenth and nineteenth territorial expansion had tragic consequences for displaced Native American populations, and many still face the ramifications of mass removal. In the 1920s, agricultural policies destabilized supply and demand and sunk the nation into its lowest state of economic despair during the Great Depression. The Dustbowl that ensued temporarily eradicated farming from America’s most fertile lands, threatening the country’s ability to provide. Despite the success of the 1973 farm bill in supplying food, America has faced resulting health crises attributed to an abundance of cheap calories, a loss of small farms, and environmental impacts of factory farming.

The successes and failures of each installation of land and agricultural policy emphasize the understated influence each wave of policy has extended over American welfare. The changes implemented since the eighteenth century exemplify the need to reform policy in accordance with domestic and international circumstances. The need for reformation has revealed no agricultural policies are sustainable for indefinite periods of time. This became evident during the Great Depression through the need to move away from expansion policy, and later in the 1970’s when Nixon and Butz sought to reduce food prices. Current agricultural policy has proved this as well, as America can no longer sustain the health and environmental implications of subsidy fueled factory farms.